Working His Mojo: Hagge Trades Baseball for Career in Engineering at Olsson

From playing college baseball trying to knock off the No. 1 team in the nation to designing a parking lot expansion; that pretty much sums up the last few weeks for Olsson assistant engineer Mojo Hagge.

Until recently, Mojo played left field for the University of Nebraska-Lincoln, and the Huskers’ season ended on June 7 with a 6-2 loss to top-ranked Arkansas in the Fayetteville Regional of the NCAA Tournament. The day before, Nebraska knocked off the Razorbacks 5-3 to force a winner-take-all elimination game for the regional title.

Fast forward to June 14. Six days after he returned to Lincoln, cleaned out his locker at Haymarket Park, and spent downtime with family fishing at a nearby lake, Mojo started working as an assistant engineer at Olsson, where he’s a member of the firm’s General Civil team based in Lincoln.

Within days, Mojo had traded in his bat and glove for computer-aided design (CAD) software and an inclinometer.

“I spent the first few days collecting myself and getting away for a bit,” Mojo said. “The next Monday, I started at Olsson and soon I was working on site plans. I’m keeping busy learning the ropes.” 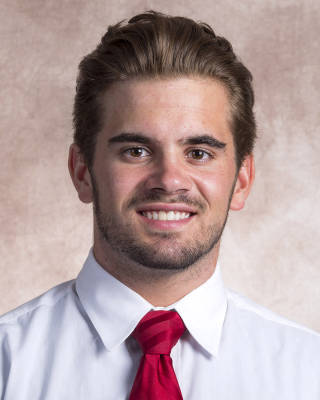 Mojo actually started working at Olsson as an intern during the spring semester. So throughout the season, Mojo was juggling the demands of playing college baseball, going to class, and gaining experience as an intern.

A year ago, Mojo figured his baseball career was over. But he was given an extra year of eligibility by the NCAA because of the COVID-19 pandemic. The extra year of school allowed Mojo to keep a busier schedule.

“Since it was my fifth year, my class workload was light and allowed me to focus on my internship at Olsson and playing baseball,” he said.

Now, Mojo attacks his job the way he used to attack pitchers. As an intern, he contributed to several different projects to gain valuable experience. He recently completed his first assignment as an assistant engineer – designing a parking lot expansion for a company that has a facility in Lincoln.

Engineering was always Mojo’s first priority. He chose of the university for its College of Engineering, and only after he applied to the school did former Nebraska baseball coach Darin Erstad offer Mojo a chance to walk-on.

“I was a student before I was an athlete,” Mojo said.

That’s why Mojo can walk away from baseball with no regrets. He played in 215 games with the Huskers during his five-year stint and finished with a batting average of .264. He was one of Nebraska’s top outfielders, recording just four errors as a Husker.

When he walked away from baseball, he did so with the knowledge he played an important role in the Huskers’ recent resurgence. Nebraska finished the season 31-12 and was ranked in the top 25 college baseball teams by several outlets.

“Going into the season, the one thing we wanted to do as a team was go into each game and compete like we’re playing the No. 1 team in the nation,” he said. “We could have been playing a midweek game against anybody, and we wanted to come out and compete. We eventually linked up with the No. 1 team at Arkansas and it gave us the opportunity to show we could play with anybody. Moving forward, I can see this becoming the norm for what to expect in Lincoln.”