Portable water pressure tanks attached to hoses attached to fire hydrants dot the landscape in a small section of Batesville, Arkansas. Residents shouldn’t get too attached to them – they’re only temporary. The tanks are part of an innovative plan to maintain water pressure on the city’s eastside while the water tower on Eagle Mountain is being repainted.

An extensive inspection of the water tower revealed spots of rust inside the tank and aesthetic wear and tear to the exterior. Ben Hunter, water plant superintendent for Batesville, needed to figure out a way to make the necessary repairs while keeping water flowing at the same rate of pressure.

This sounds trickier than it appears because the tower needed to be taken offline from the water system until the surface of the tower was completely painted, inside and out.

If the water pressure dropped even a little, Hunter would hear about it. The tower provides water to hundreds of homes and to Lyon College, which has nearly 700 students.

Enter Olsson, and our firm’s long-standing relationship with the city.

Before the project kicked off, Ben reached out to Olsson to help come up with a solution. Jim Ulmer, lead project manager for Olsson’s water/wastewater team in Fayetteville, and Jeff Windham, a senior technician at Olsson, had worked with city officials in Batesville for decades and helped the city with numerous water-related projects.

Jeff and Jim ultimately decided that using the city’s hydrants to install a pressure relief system was the best way to go. They were looking for a system that was energy efficient and water conscience while the water tower was offline.

Most one-tank systems operate via pressure bypass valves during repairs. This leads to high energy usage, overuse of pumps, and it wastes thousands of gallons of water each day. In addition, this provides low pressure during peak demand and eliminates a reserve for fire protection.

“Through the course of our discussion, we couldn’t justify wasting that much water over a six-month period, which is how long the project is scheduled to take,” Jeff said. “This was not a cost-effective way to do it.”

After doing extensive research about which methods could work for Batesville, Jeff and staff engineer Erin Needham contacted Tomcat Consultants of Rosebud, Missouri, which specializes in providing solutions for potable water issues and tank accessories.

Jeff and the Olsson team worked with Tomcat to determine eight tanks were needed to keep up with demand and maintain strong water pressure (storage capacity should be about 15 percent of average daily consumption) in the affected area of Batesville. 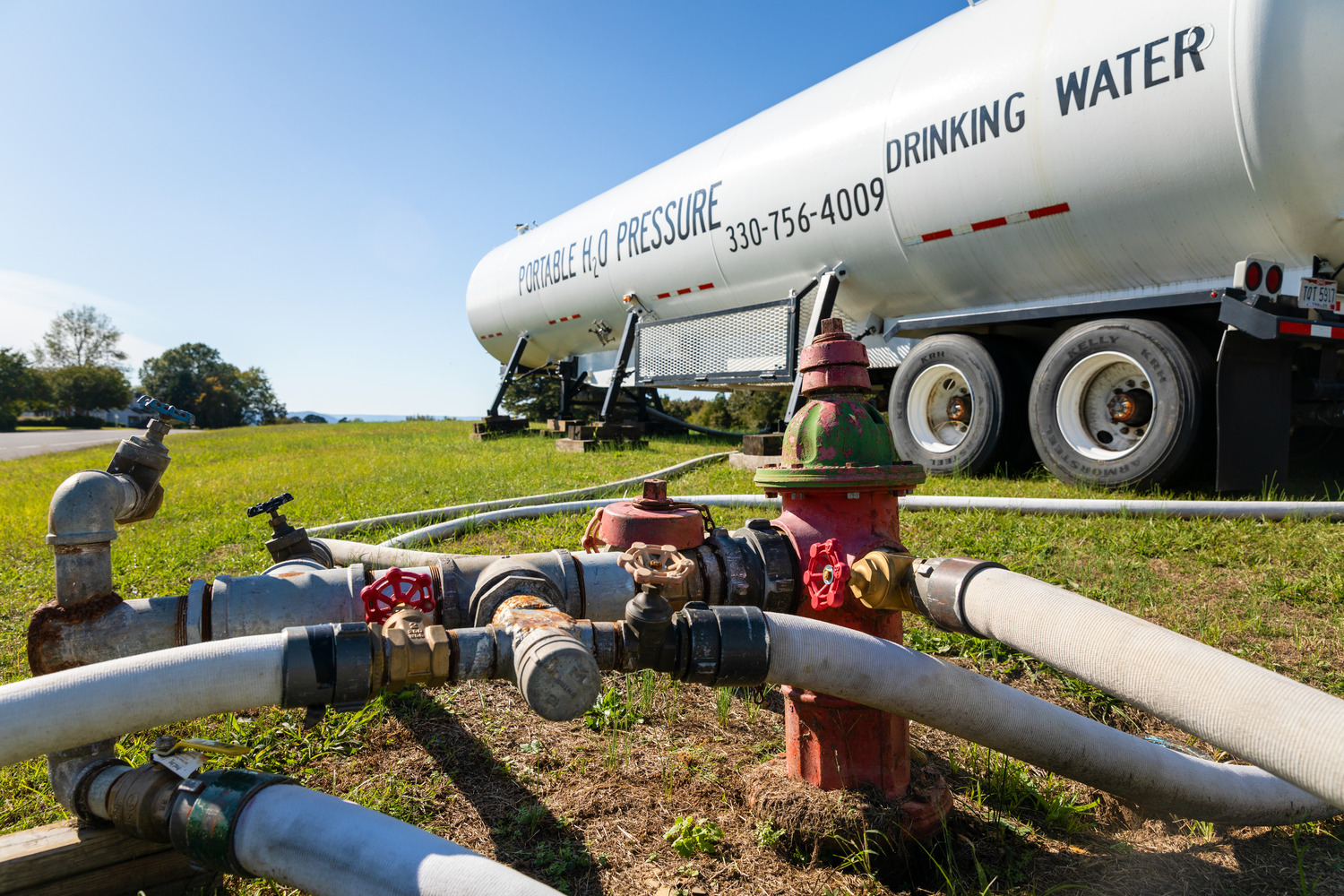 Tanks were placed in strategic locations inside the pressure plain that the tower serves. These portable tanks are connected to hydrants in the system by standard 2.5-inch fire hoses.

“The tanks function like a well system on a house,” Jeff said. “The pump adds pressure to the compressed air inside the tanks and the air releases the pressure slowly to keep the level steady. We basically took a system that was getting pressure from an elevated tank and converted it to a well-pump pressure system.”

After talking with Ben and his team in Batesville, Olsson proceeded in setting up the portable tanks before the water tower was taken offline. The city purchased a variable frequency drive (VFD) and installed it on one of the pumps at the pump station that serves the tank. They also hired a contractor to performed work on the SCADA system that allowed for controlling the VFD and other components of the operating system.

The Eagle Mountain tank was isolated from the system and pressure was maintained with the temporary storage tanks for a month before draining the tank to begin the painting project.

“When we took the elevated tank offline, the portable system worked like a top,” Jeff said. “Ben had to make one minor adjustment to a pump control valve that controls the starting and stopping speed of the pump due to a situation of high pressure in the system. After this one adjustment there have been no other issues.”

The tower went offline in September and contractors Kimery Painting Inc. of Beggs, Oklahoma, started sandblasting and painting soon after. Kimery will coat the exterior as quickly as possible so they can start the process on the tower’s interior before the weather turns cold.

The city chose to use a Sherwin Williams painting system because it comes with a 15-year warranty provided specific qualifications are met during the application process. Tyler St. Louis, an assistant technician on our Olathe Nondestructive Testing team, is serving as the National Association of Corrosion Engineers (NACE) 1 onsite inspector for the project to help to ensure the city qualifies for the warranty. 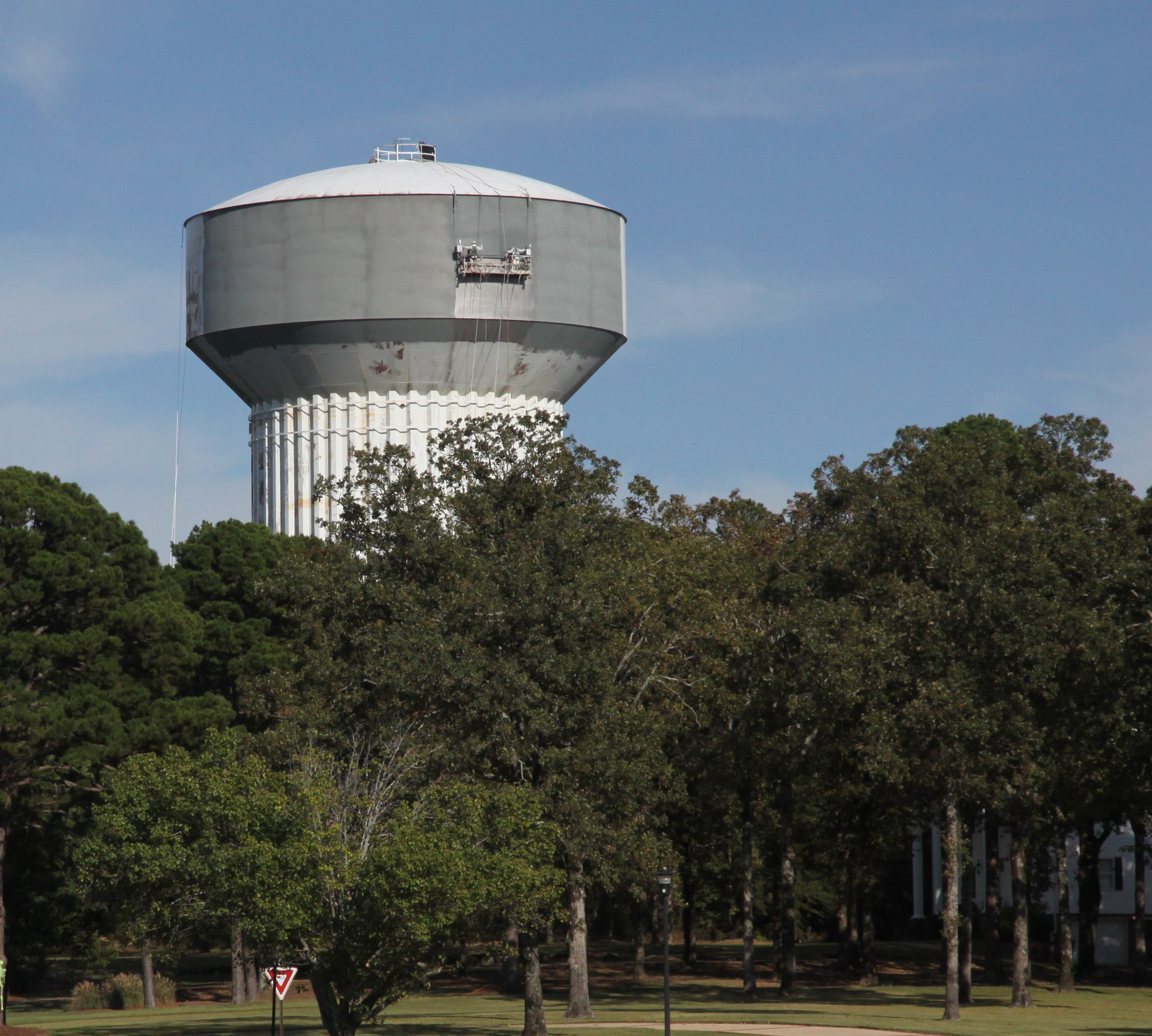 We also helped with environmental permitting before the project began.

While the water tower was being repainted, Olsson engineers recommended the installation of a Tideflex/Red Valve mixing system inside the unit to improve water circulation. The water tower testing has revealed minute traces of trihalomethanes in the water, which can be significantly reduced by keeping the water moving while it’s being stored.

This mixing system was needed because Batesville adds chlorine to its water for regulatory required disinfection. When chlorine is in contact with water for a period of time, the reaction may create trihalomethanes, and high levels of trihalomethane can be carcinogenic, according to the Environmental Protection Agency (EPA). Therefore, EPA regulates the levels of trihalomethanes in drinking water to strict standards. The City of Batesville operates the water system to meet these strict standards.

“We have a one-pipe system that controls the water going into and coming out of the tower, which is not optimal when you’re trying to circulate water,” said Ben, who has worked in the city’s water department for 18 years. “The Tideflex system will fix that.”

It is estimated to take six months to paint the water tower, so Batesville’s should be back online by early March.

Not that it matters to the citizens of this North-Central Arkansas community.

“Right now, most of the people there haven’t noticed a difference – it’s business as usual,” Jeff said. “If the pressure had dropped even a little bit, people would be calling the water department immediately. So far, they have not received one phone call to my knowledge.”