More Miles to Go Thanks to One Connector

There’s a new bridge in Lincoln, Nebraska, and it doesn’t just span a section of railroad track. This bridge connects multiple trail systems that extend south into Kansas and east to Omaha, providing greater access to a beloved park and giving people a chance to explore.

That’s a lot of miles to travel all thanks to one 350-foot-long bridge.

The bridge – the Great Plains Trails Network Connector – links the Jamaica North Trail with the Rock Island Trail and now gives direct access to Wilderness Park, the largest park in Lincoln at 1,474 acres of land located in the southwestern part of the city. The Jamaica North Trail leads from the Haymarket district in downtown Lincoln south all the way to Kansas; the Rock Island Trail connects with the MoPac Trail, which extends east toward Omaha.

One bridge. So many places to go.

“I hope it gets people out to explore the trails and Wilderness Park,” said Sara Hartzell, park planner for the Lincoln Parks and Recreation Department, who oversaw the project. “I hope it helps people become more confident to explore some of the trails that once were a little more challenging to access. And I hope it changes the way people commute and inspires people to give commuting on the trails a chance.”

One thing it will change is how people cross two BNSF Railway tracks. The bridge now provides a safe place for pedestrians and cyclists to cross the highly active tracks and eliminates an illegal shortcut they once took to get to Wilderness Park, even if it meant climbing over idling train cars. 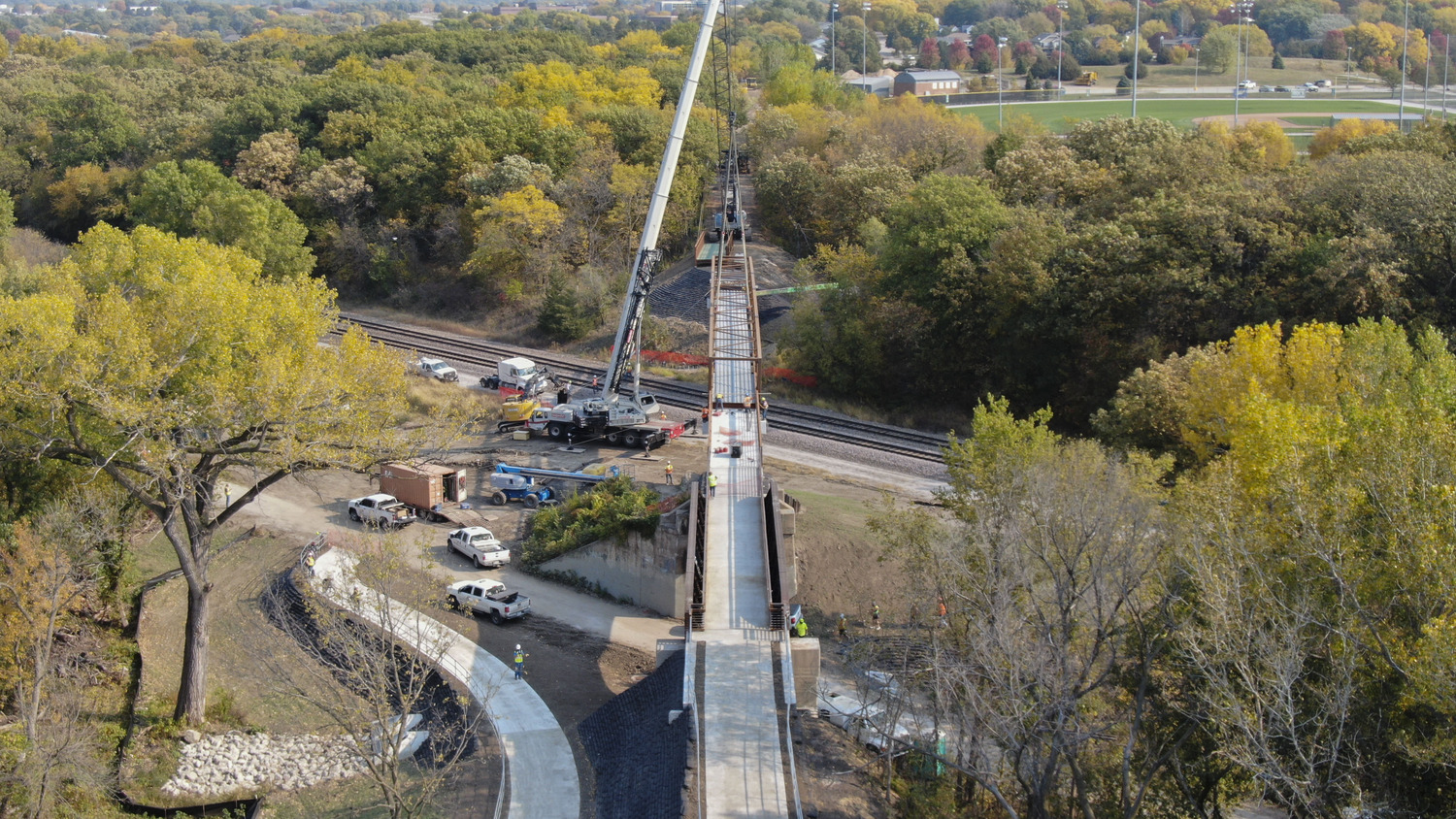 Without the dangerous shortcut, getting to Wilderness Park from the Jamaica North Trail near Densmore Park meant at least an extra two miles of walking or biking.

“We created a very key connector for South Lincoln and the community as a whole,” said Ross Barron, a bridge technical leader with Olsson and the lead engineer of the project. “When the public first caught wind that the bridge was a possibility, there was a lot of momentum and people rallied around the idea of building a connection here, and Lincoln Parks and Recreation and the GPTN were a driving force in turning the vision into a reality.”

The project was so well received by community members that they paid for half of it. The $2.2 million price tag was split between taxpayers (the Railroad Transportation Safety District and Lincoln Parks and Recreation Department) and private donations from the Great Plains Trails Network (GPTN).

Olsson was involved with the project from the outset. We conducted the initial study and gave the Lincoln Parks and Recreation Department solutions to connect the two trails and an estimate of possible costs.

“We started working with Olsson on a small contract, and that was a really smart step because it showed we could do it and it got people excited,” Sara said.

Our civil engineers faced several challenges during the project. The bridge is in a wooded area and getting heavy equipment to the project site was difficult. It was also challenging to get an accurate survey of the land given the steep inclines and unsteady terrain.

We had to work with the railroad on all work given the heavy activity on the tracks.

We also wanted to incorporate an existing bridge into the design: The Train Wreck Bridge, named for a Rock Island derailment near the site in 1896.

“That was one of the most interesting elements of the project,” Ross said. “It marries new modern truss construction with an old railroad bridge and allows us to honor the history of the old rail bridge by turning it into a pedestrian crossing.”

Parks and Recreation wanted the new bridge to fit in with its surroundings, meaning it had to provide access for people and look like it belonged in a natural setting. Our design incorporated vegetative geobag retaining walls rather than concrete blocks or sheet pile to create a stable embankment that supports natural vegetation.

“In a short period of time, it’s going to look like a natural part of the woods,” Ross said. “The average person won’t even know it’s a retaining wall.”

Throughout the project, we worked closely with the Lincoln Parks and Recreation Department’s stormwater manager to ensure the sediment and erosion control plans were followed and water quality was protected in the Salt Creek floodway. One way the department chose to cut costs was to keep stormwater reviews inhouse. B.J. Koinzan, a construction administration senior technician for Olsson’s Lincoln Field Operations team, mentored the Lincoln Parks and Recreation Department during the project to point out what to look for in a stormwater prevention plan and to make sure the plan was being followed. 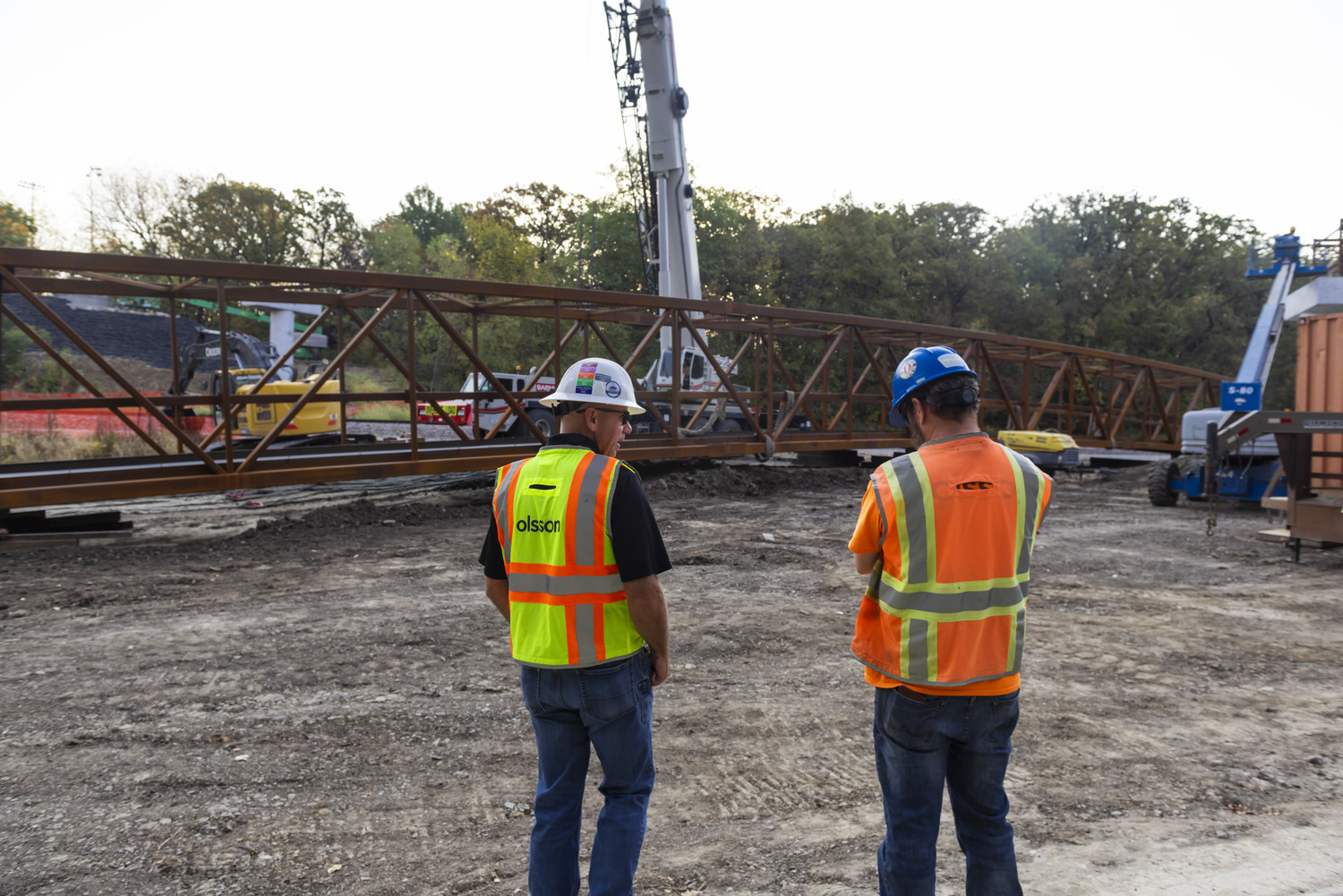 Engineers from Olsson worked with K2 Construction, who built the bridge, to make sure everything fit perfectly.

“The management of the project was excellent,” Sara said. “Sometimes that part of a project gets overlooked when you’re passing out accolades and the design people get all the laurels. But the management B.J. and Lance provided kept everything on track, kept me informed, and they always had an up-to-date schedule. When we had challenges with the railroad and it slowed us down a bit, they had contractors working on things that could be addressed while we waited. For a project this size, we were expecting about six weeks of delays and we finished with only 10 days. You have to give K2 Construction a lot of credit for that, too.”

And the result is a bridge span and trail that was designed and built to be part of the natural landscape, provide safe access to additional trails, and make it easier to discover a “hidden gem” of a park.

“It’s going to be a very cool landmark for the city of Lincoln,” Ross said. “People who are out adventuring on city trails will really be amazed that this exists. I think it will draw more and more people into Wilderness Park, which is just a great place in Lincoln to get the bike a little dirty, take the dogs for a walk, or generally just enjoy some of the best nature Lincoln has to offer. Also, the access to the Jamaica North trail system is going to be a huge benefit for trail commuters living in South Lincoln. We were greatly honored to be a part of this project that serves such a testament to the city’s love of its trails system.”