Motorists who frequently navigate the intersection of the Chickasaw Turnpike and Oklahoma State Highway 1 (SH-1) now do so with greater peace of mind. This once dangerous T intersection now allows cars to leave the turnpike for SH-1 in a safer manner than ever before.

The T is located at the south end of a 3-degree horizontal curve on SH-1. Both roads in the intersection were originally constructed to consist of two lanes with shoulders. A stop sign at the end of the turnpike governs its traffic, so all cars must stop before turning onto SH-1, which had a posted speed limit of 65 mph. 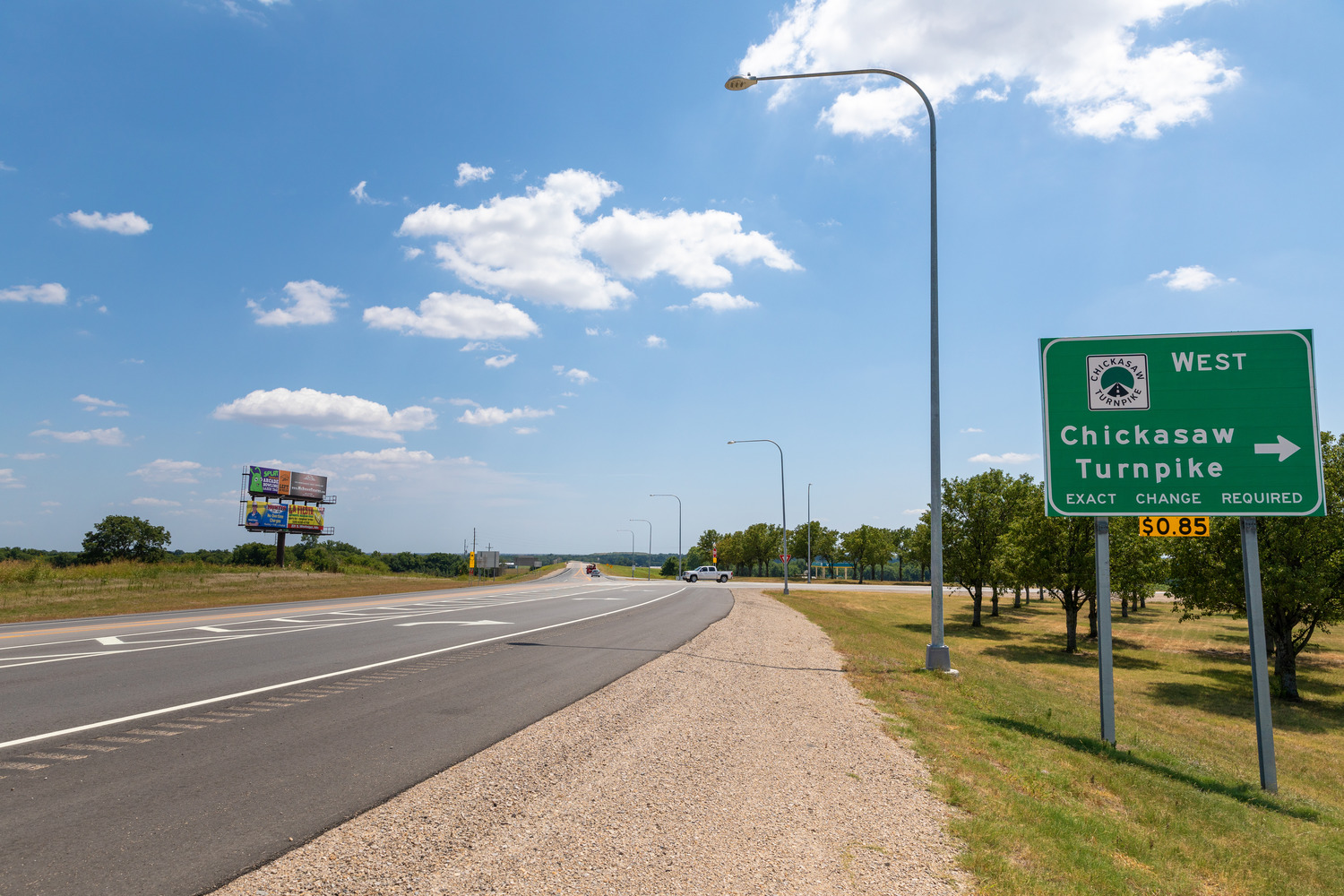 These fatal crashes were more than enough to get the attention of officials from the Oklahoma Department of Transportation (ODOT).

“This was an intersection that was sure popping up often on their (ODOT’s) radar, so they reached out to the Oklahoma Turnpike Authority (OTA) and the Chickasaw Nation to see if we could do something to make it safer for drivers,” said Darian Butler, director of engineering with the OTA.

The OTA, ODOT, and Chickasaw Nation formed a partnership and agreed to fund a project to improve the intersection to make it safer for motorists. All three entities had a vested interested in the project: The OTA is responsible for all work done on the Chickasaw Turnpike, ODOT oversees SH-1, and the turnpike is located in the Chickasaw Nation’s tribal jurisdiction.

Olsson was tasked, as part of its General Engineering Contract with the OTA, to complete preliminary and final design for improvements on the intersection. Working with Olsson’s team of engineers, led by project manager Jimmy Sparks and lead designer Derick Millican, the partnership approved a plan to widen SH-1 to accommodate dedicated left- and right-turn lanes with appropriate storage and deceleration length and regrade drainage ditches along both roadways.

Dedicated right- and left-turn lanes on SH-1 were added. We incorporated right-turn channelization, separating the right-turn lane from the adjacent through lane with striping. The channelization provided for much earlier separation of vehicles turning right from those continuing through on SH-1, which should also make it easier for stopped vehicles coming from the turnpike to determine if approaching vehicles are turning or continuing through. The channelization also helped neutralize the effects of the steep pavement cross-slope along the curve.

We also worked with ODOT and the OTA to lower the speed limit through the intersection to 55 mph.

These design features were all aimed at improving safety and reducing crashes.

“Reducing the speed from 65 to 55 mph will have a major impact,” said Derick, the lead designer from Olsson. “This is a difficult intersection to navigate, especially from the turnpike as you approach the stop-controlled intersection. Lowering the speed limit should help make the driving task simpler.” 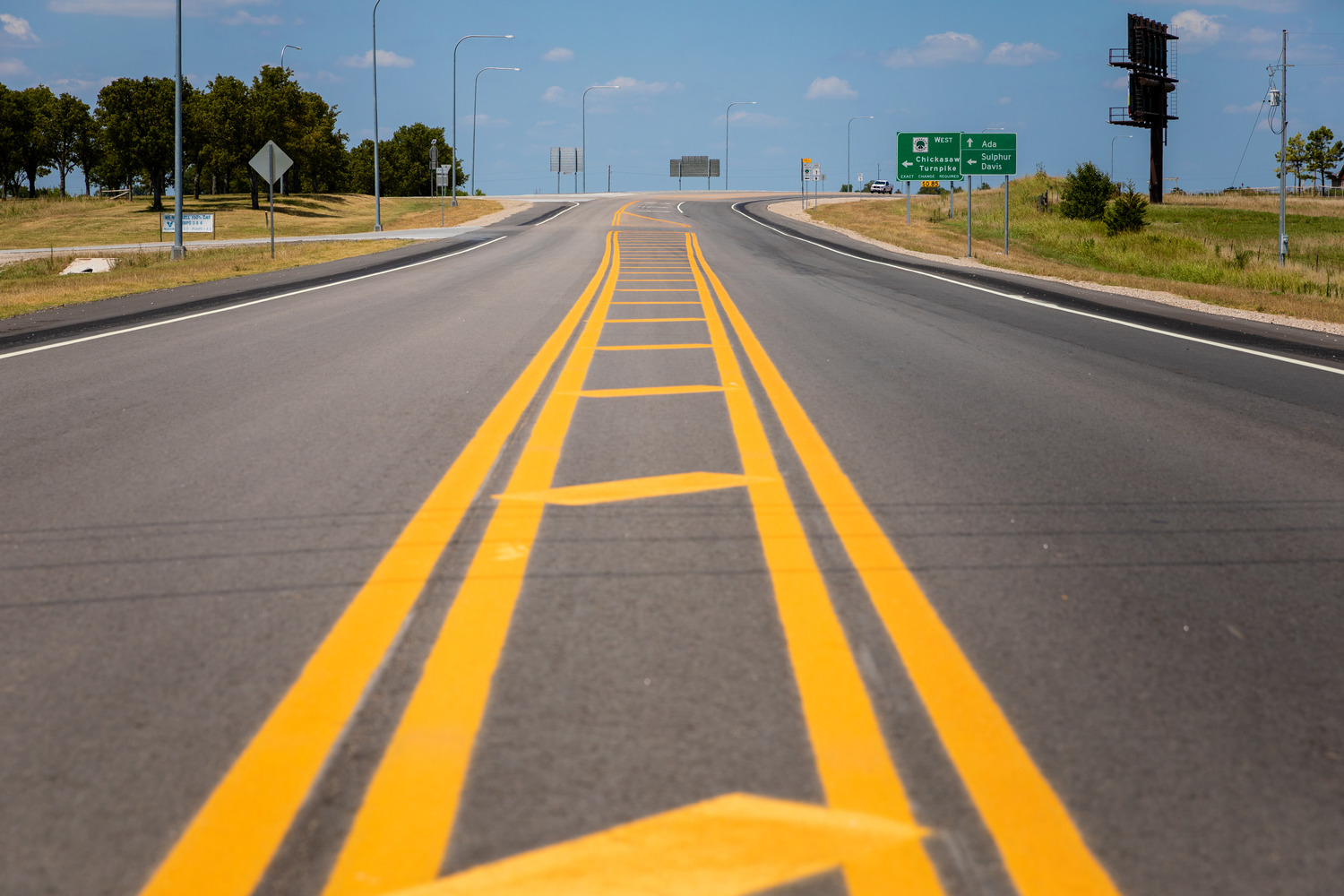 One of the most difficult challenges during the design phase was widening both roads without acquiring more land, which kept the overall cost and time required for construction low.

“We were trying to do as much as we could to improve safety within a fairly tight budget,” Derick said. “We were able to work within the existing right-of-way, which allowed us to complete the project as soon as possible and control costs.”

Final designs were completed August 2018. Work was done by The Cummins Construction Company of Enid, Oklahoma, and was completed April 2019.

The changes appear to be working. After nine months, no major accidents have been reported at the intersection and traffic is moving more smoothly than before.

“If we can make infrastructure improvements to potentially save someone’s life or save someone from an injury, I think that means a lot,” Derick said.

Final cost for the project was approximately $1.6 million and was split three ways. Darian, with OTA, believes the project would have still been built without the partnership, but joining forces helped get it done sooner rather than later.

“It was done right with the partnership,” he said.