Honoring a Legacy of Service in Kansas City, Missouri

When Mark McHenry announced he was stepping down as director of Kansas City’s Parks and Recreation Department, he told people he was looking forward to “enjoying the city’s parks and boulevards as a retired resident.”

In other words, he wanted to enjoy the fruits of his labor. After all, Mark worked in the department for 44 years, oversaw the maintenance of all parkland, and spearheaded the creation of 34 additional parks in the city’s landscape.

Kansas City now has 221 parks, but to Mark, one is a little more special than the others. 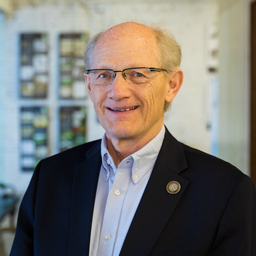 This fall, Tiffany Springs Park was renamed Mark L. McHenry Park in honor of his service to the parks department. New signs officially christening the park were recently installed. The park is in Northwest Kansas City, Missouri, near Kansas City International Airport.

Mark is amazed by the gesture from the city.

“I feel honored to be in such good company,” Mark said, noting several parks have been named for former parks commissioners and former directors.

“The park is located near Highway 152 and there’s a sign along the highway alerting people to its location. Several thousand people every day drive right by that sign. I can’t tell you how many people have called to say they saw ‘my sign.’”

Mark officially retired from the parks department at the end of 2018, but he didn’t stay on the sideline for long. By mid-February 2019, he joined Olsson as a business development specialist based in Kansas City working primarily in landscape design with Ochsner Hare & Hare, the Olsson Studio.

He joined Olsson thanks in part to the relationship he developed with Darren Hennen, Olsson’s Kansas City Northland office leader, while serving on the Northland Chamber of Commerce. Mark also worked with teams from Olsson during his career with the Parks and Recreation Department.

“In the business I was in, I worked with a lot of engineering and architecture firms and I met a lot of people,” Mark said. “That’s how those things happen. Lutjen (purchased by Olsson in 2016) had a big presence in the Northland, and Ochsner Hare & Hare has had a big influence in Kansas City’s parks system going all the way back to the beginning, working with George Kessler, the godfather of the Kansas City parks system.

“Between knowing Darren and knowing Olsson, I could tell the firm was on a solid growth pattern that provides great services. That’s what drew me to Olsson.”

Even though his retirement was short-lived, Mark still plans to find time to enjoy the region’s green spaces. Including his own park.