At a medical office building in Casper, Wyoming, the wheelchairs roll unaided and wall partitions open by themselves. This isn’t because of some wonderful new technology but because of an old engineering problem—poorly settled foundations.

Built in 2006, the building has experienced dramatic settlements because of the consolidation of underlying natural soil and engineered fill dirt. The structural engineers of Olsson were called in to determine what, if anything, could be done to return this building back to normal service.

The building was constructed as part of a large medical development in southeast Casper. Former grazing land, pitted with drainage draws from water moving from Casper Mountain to the south to the North Platte River, was filled in to provide a level landscape for the development. A geotechnical investigation was done before the final grading was complete and construction began, and more dirt was placed than originally expected. Olsson was involved with the investigation. The natural drainage pattern of the site was not diverted, ensuring that the soil used to fill the draw would remain in a varying state of moisture because of seasonal runoff from the mountain. Finally, the fill dirt was placed without a geotechnical engineer monitoring compactness levels, as is normal with fills below buildings. Each of these issues is a concern individually, and together they resulted in the problems seen today.

The soil beneath the building has settled in a way that is not uniform. Portions of the building over deeper fill areas have settled more. Olsson’s recent survey of the first floor was graphed to show the different magnitudes of settlement. This graph was then placed over an old photograph of the site to show how the settlements relate to the depth of fill. As seen below, the floor sags the most (shown in the red area) where it is directly over the deepest part of the fill (where the bottom of the draw is). 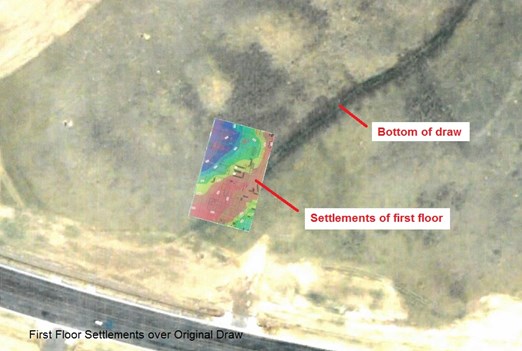 Severe drywall cracking, doors that won’t open or close, and elevators that need constant adjustment are just a few of the issues faced by users of the building. Although the basic structure can absorb the movements, the inner finishes and exterior wall elements cannot. Sensitive equipment in the building, such as X-ray and MRI machines, need frequent service to maintain accuracy. Although all of the exterior windows have been replaced, continued wall movement has resulted in gaps forming around the window frames, which allows water to enter the building. 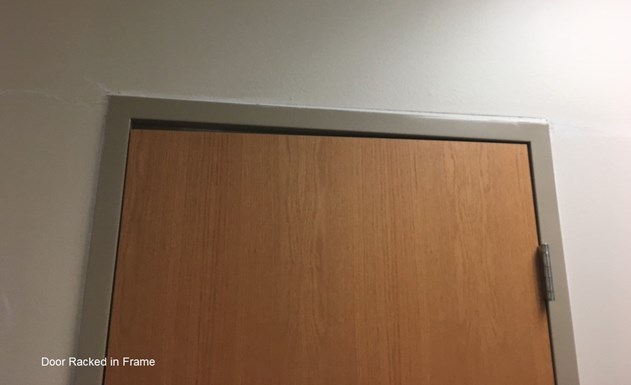 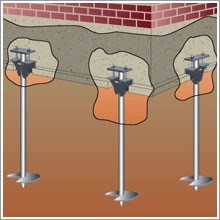 If the building owners decide to pursue stabilization, the only realistic path forward is to bypass the unstable soil layer and bear the building footings and slab on the bedrock below. To do this, all building columns and footings need to be underpinned with helical piles, and the slab needs to be supported with injection grout piers. 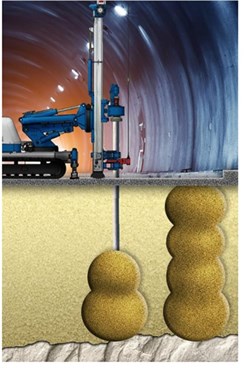 The stabilization effort is estimated to cost about $1 million, not including the demolition and replacement of damaged interior elements. A cost/benefit analysis will be required to determine the most cost-effective path forward. The engineers at Olsson are ready and able to assist with which ever path the owners choose.