Flood control projects are a little like a homeowner’s policy for a community – something they purchase but hope they’ll never need.

Engineers who specialize in flood protection at Olsson hold a similar view. We design projects to withstand calamities we hope will never visit the communities where we work and play.

In March, catastrophic flooding on a record scale hit eastern Nebraska and western Iowa. Before receding, the floods took five lives and inflicted a multibillion-dollar toll on homes, businesses, farming operations, and public infrastructure. Thousands now find themselves in a recovery that will last months.

The disaster also tested dams, dikes, canals, and levees. Forces of nature that don’t neatly fit in 100-year or 500-year categories pushed structures to, and beyond, their engineered limits.

“I don’t even know how you design for an event like the one that hit Nebraska,” said John S. Olsson, our executive vice president of consulting services who has extensive experience as a water engineer. “When you get to see the work you do withstand the test of nature, it gets pretty personal.”

In the wake of the floods, we’ve heard from several of our client-partners expressing gratitude for projects we helped them envision, design, and construct.

Because, over several harrowing days in March, they really needed them.

Dan Kathol knows all too well how water can upend lives. While living in Milwaukee, Wisconsin, two 500-year floods swamped his basement in a three-year span.

When Dan retired and moved back to his hometown of Hartington, he volunteered to spearhead a flood control project. The potential for flash flooding was a well-known threat to a nursing home/assisted living/rehabilitation center, a motel, and more than 60 single-family homes. The project would also allow an area southwest of the city to become available for new housing, essential to growing the community of 1,550 people in northeast Nebraska.

That’s where we came in. Our plan called for a high-hazard dam engineered to withstand a 500-year flood. The system would release stormwater from a detention pond, allowing a controlled volume to flow through a streambed, culverts, and a storm sewer before joining a creek northeast of town. 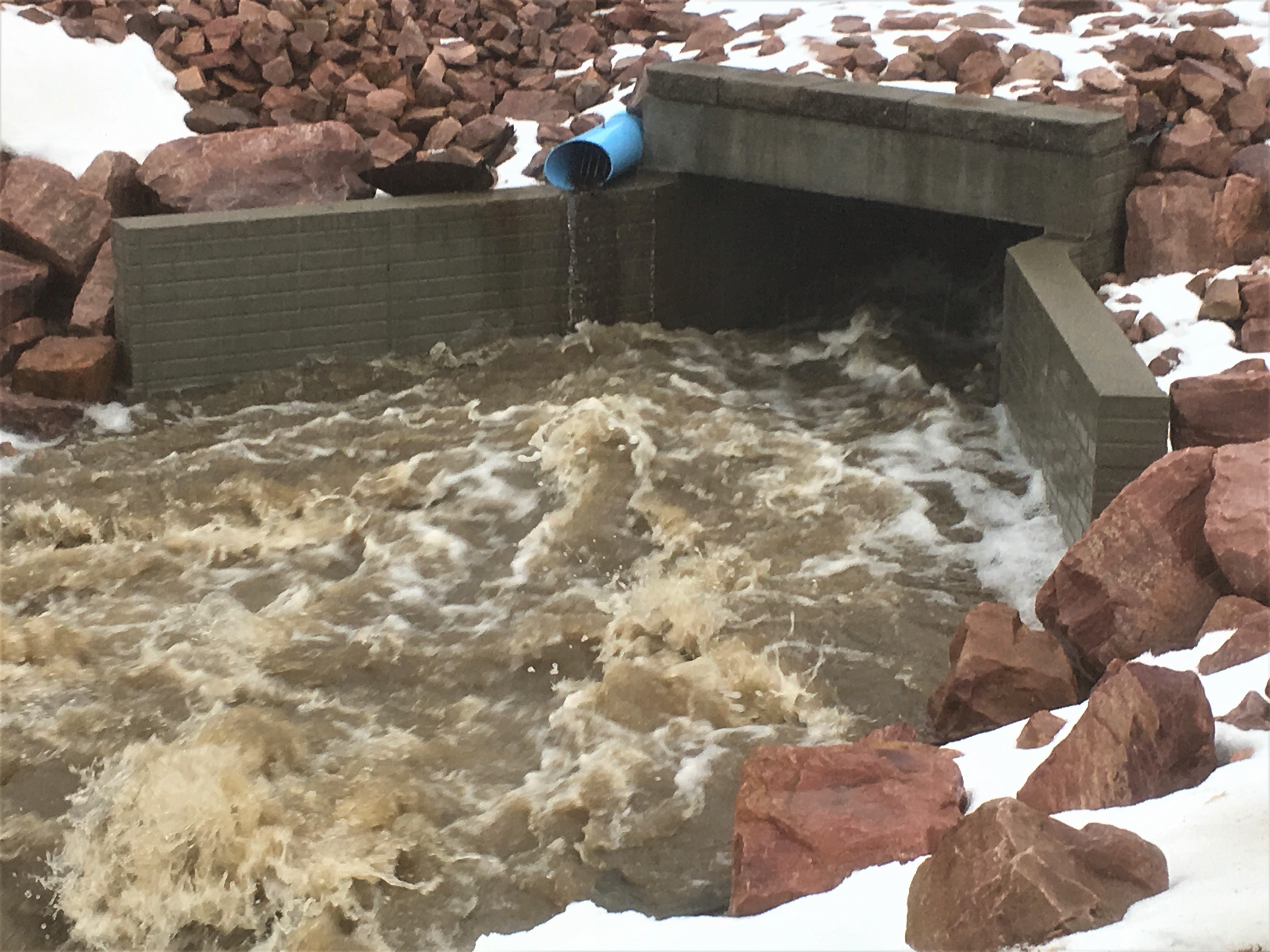 Water rushes through an outlet structure at the height of March flooding in Hartington, Nebraska.

A significant cost driver of the $1.3 million project emerged when soil testing found a high level of sand and gravel at the dam site. Senior engineers Travis Figard and Mike Placke worked with our geotechnical team to design a solution, according to Carter Hubbard, technical leader of water resources. They recommended excavating a keyway trench as deep as the dam was high and backfilling it with clay soil delivered by a local contractor at a cost savings.

Financing included a water quality grant distributed by the Nebraska Department of Environmental Quality, a low-interest loan from the State of Nebraska, and funding from the city. The project did not require a tax increase, which helped it win support from elected officials and citizens.

March 12 saw the start of three days of rain over parts of eastern Nebraska, including Hartington. When combined with rapidly melting snow and frozen soil, the runoff quickly overwhelmed streams and rivers, triggering flash flooding across the region.

Dan pulled on a raincoat and muck boots and kept a close eye on the flood-control system, day and night. He was sleep-deprived but elated when it was over. He said that five years of emails, meetings, presentations, and phone calls had been vindicated. 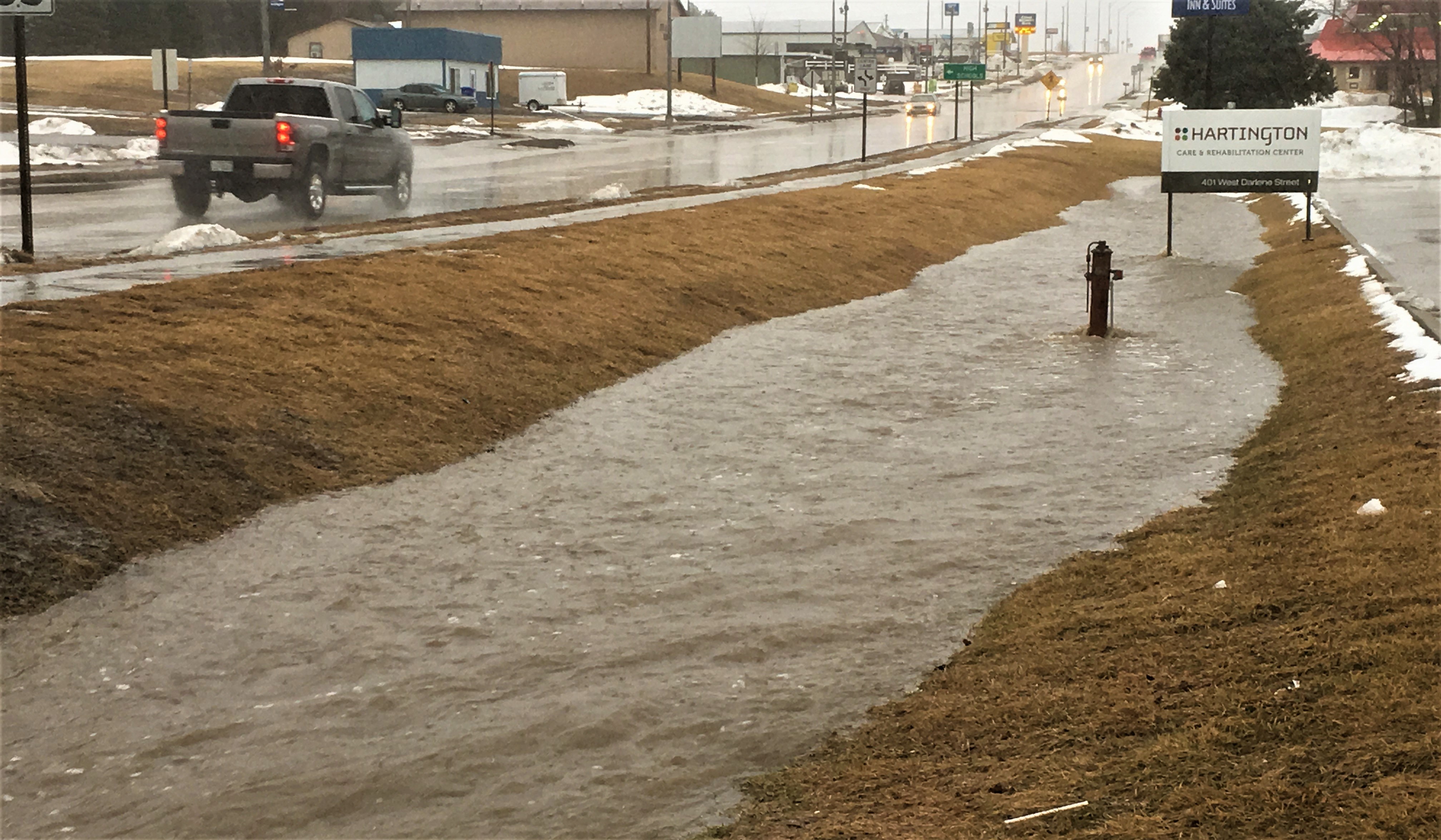 Rather than flooding, a controlled release of water flows past the nursing home in Hartington, Nebraska.

“The system really got challenged and it worked like a charm,” Dan said.

Had the project not been built, Dan estimated that Hartington could have been confronted with $6 million to $8 million in damage.

Flash flooding in the region closed some nearby highways, which stranded high school students who had come to Hartington for a district speech competition. The students stayed in the same motel that would have been in the path of flooding had the dam not been built.

“I think it opened a lot of eyes about what could have been,” Carter said. “It was a really good feeling to know that it saved a lot of damage and potentially protected against loss of life.”

Days after the storm, Dan sent an email to Olsson that made everyone on our water team feel good.

“I got a call from the mayor and others in town thanking me for pushing this project through,” he wrote. “I want to thank Olsson for all your work and diligence to give us a flood control system that worked.”

After the 2005 hurricane spawned flooding that devastated New Orleans, the Federal Emergency Management Agency (FEMA) required safety reviews of levees across the country. That included the levee surrounding Whitetail Lake, a private residential development south of Columbus that lies between the Loup and Platte Rivers.

Leaders of the Sanitary Improvement District (SID) who oversee infrastructure maintenance at the development hired us in 2009 to keep FEMA certification for their levee. Services provided by our technical experts included survey, permitting, geotechnical analysis, hydrology and hydraulic analysis, preliminary and final design, and construction management.

We designed a concrete floodwall to provide adequate freeboard, which refers to the space between the top of the levee and the elevation of a 100-year flood. We also incorporated an aluminum gate to prevent floodwater from flowing through the development’s entrance. A rock riprap structure was installed on the southwest exterior corner of the levee to help the spot withstand erosion.

Some members of the homeowner’s group, however, had a problem with the riprap. Critics felt it detracted from the property’s aesthetics.

Don Day, the engineer who managed the Whitetail Lake project, explained that more costly options existed. But he also emphasized that the levee corner would be subject to intense scouring in a major flood. When some homeowners continued to protest, Don made it clear that as the engineer of record, he could not ethically sign off on the plan without the riprap structure. It was essential to the safety of the levee.

The homeowners relented and the project was completed.

Nearly a decade later, the residents of Whitetail Lake found themselves under siege by two major floods as the Platte and Loup Rivers left their banks.

An aerial video posted on YouTube showed the development surrounded by water. Don, who is now our director of project support, also saw a Facebook video posted by a homeowner showing how the levee was keeping floodwaters out. 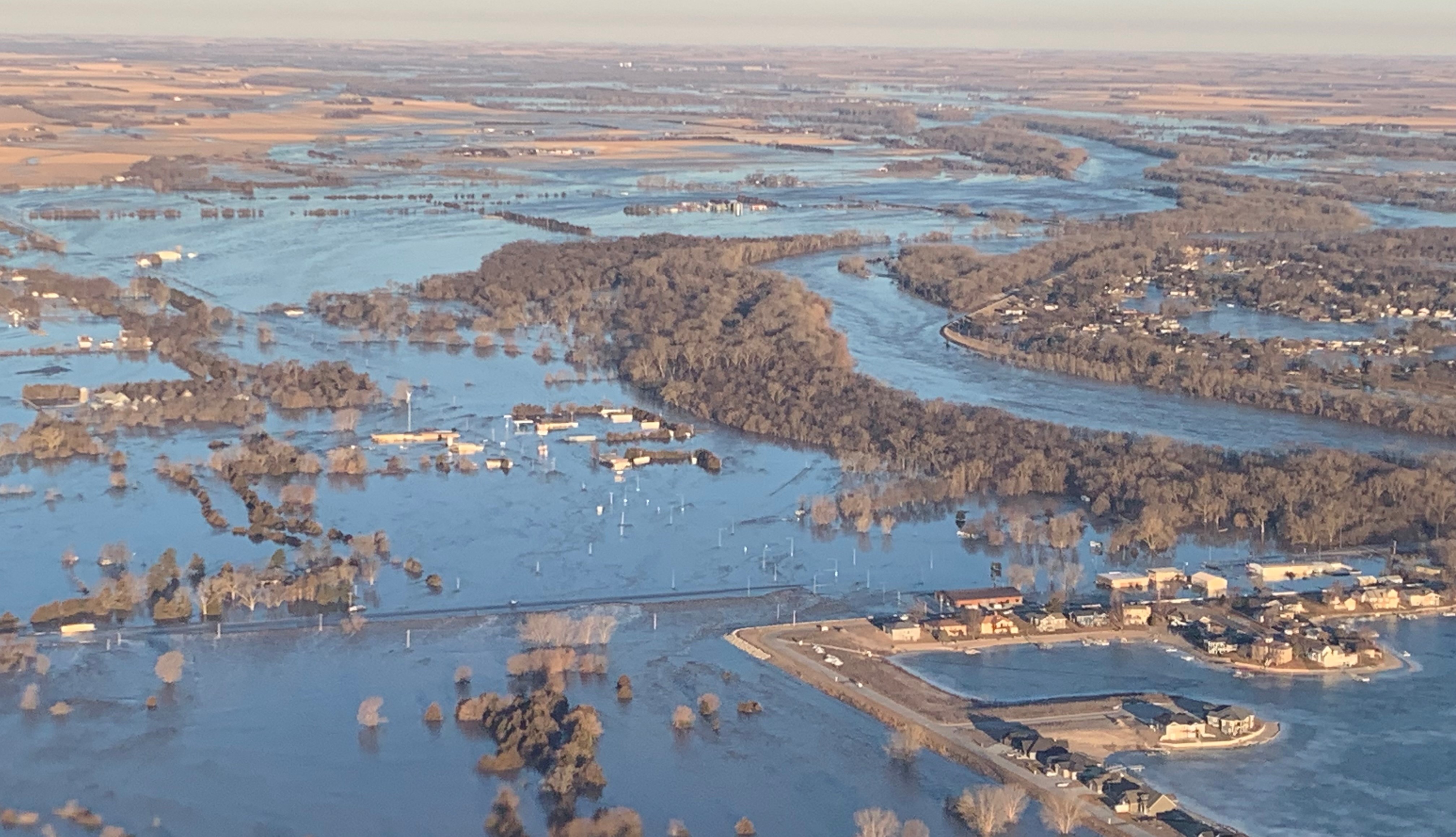 Later, Don spoke to one of the SID leaders, who reported that no homes in the development had been flooded. Don mentioned the riprap structure, and the client said that the former critics had transformed into enthusiastic supporters.

What once looked unattractive, was suddenly beautiful.

“With water resources projects like levees, you hope you’ll never see them function,” Don said. “But when you do, and they work, you really feel good about it.”

The danger of flooding often lurks in communities for years before the opportunity and funding come together to build a project. That’s how it was in Waverly.

In 2010, the city’s Watershed Master Plan identified the Ash Hollow tributary as the top long-term flood control priority. Draining a three-square-mile area, the tributary loomed as a significant threat to 98 homes and businesses in southwest Waverly. As a result, property owners were compelled to purchase costly flood insurance.

Officials with the City of Waverly worked for several years to find a way to fund the project, before the right partnership emerged with the Lower Platte South Natural Resources District.

We were selected to engineer a high-hazard dry dam with the capacity to hold back runoff from a 500-year storm. That’s the equivalent of 889 acre-feet of water or nearly 290 million gallons. Project sponsors cut the ribbon on the $2.8 million, 32-foot-high dam in late 2017. 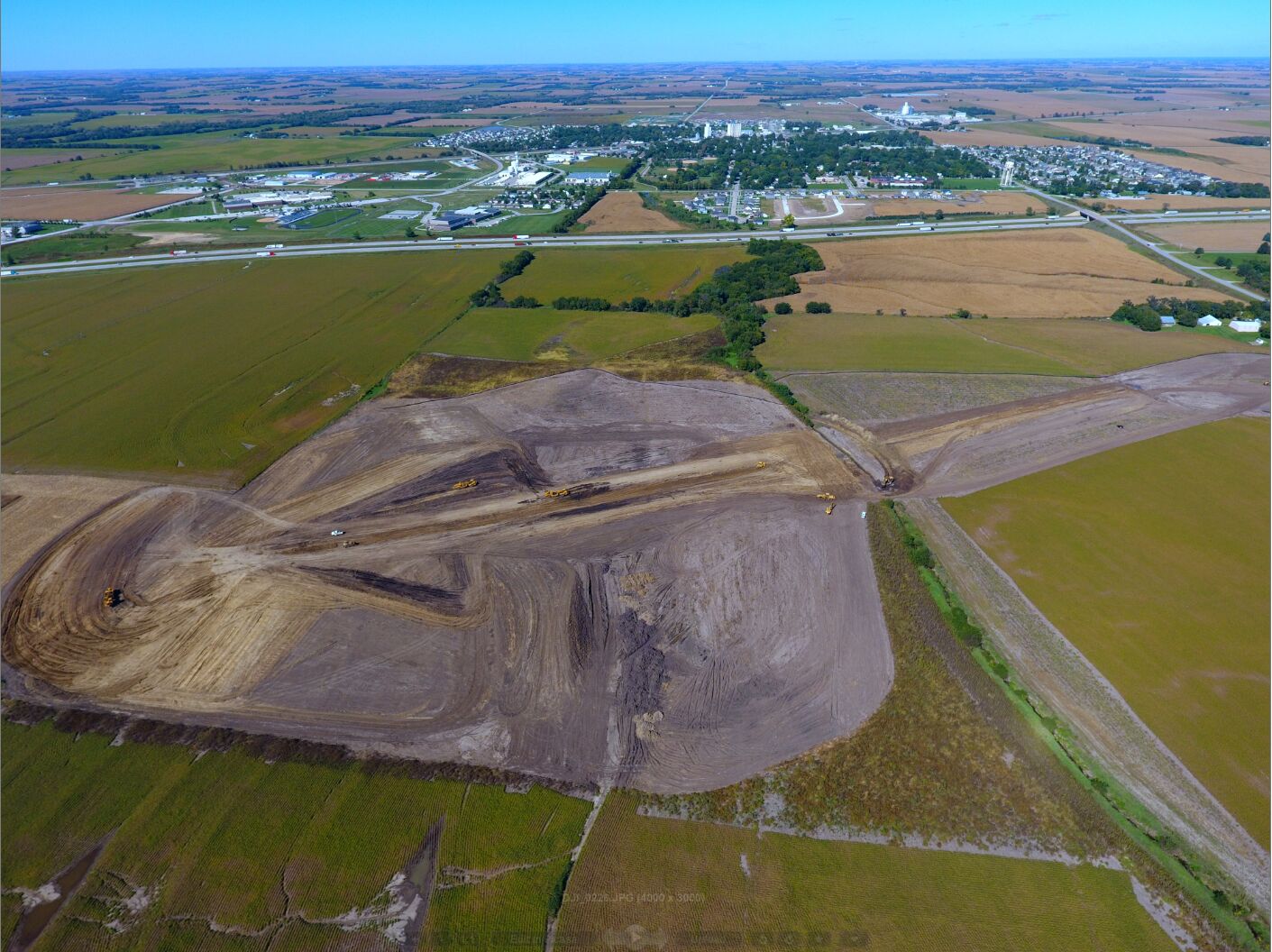 When a combination of snow melt, rain, and frozen ground triggered widespread flooding across Nebraska in mid-March, the Ash Hollow Dry Dam pumped the brakes on water rushing toward Waverly. Based on rough calculations, the dam held back 85 acre-feet of water, or nearly 30 million gallons, allowing it to drain off at a controlled rate over subsequent days. While the volume was well short of a 500-year flood, it was enough to do damage if unchecked. 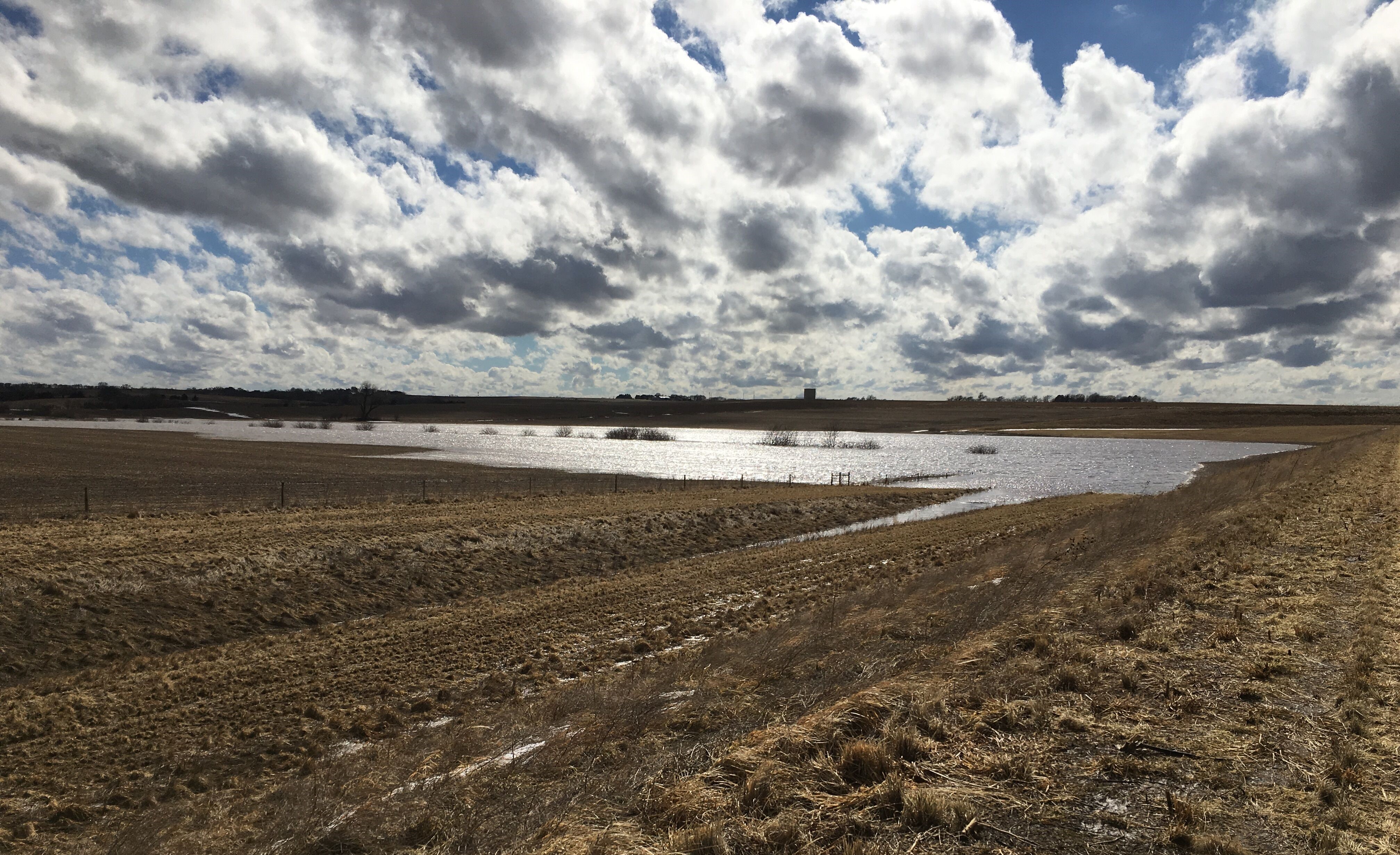 The Ash Hollow Dry Dam reigns in roughly 30 million gallons of water that would have damaged homes in Waverly, Nebraska.

The structure also held back a heavy rain in the watershed in 2018, said Mike Placke, our senior engineer who designed the dam.

“So, two years in a row, the dam has functioned as designed,” Mike said. “They haven’t been extremely big storms, but the dam is working, it’s doing its job.”

Chad Lyon, floodplain administrator for the city, has closely monitored the project during each storm. Without question, the project has already provided cost benefits to the sponsors, he said.