Some days the services we provide allow organizations to feed people around the world. We think that’s the epitome of engineering with purpose.

We are helping the Orphan Grain Train expand its headquarters in downtown Norfolk, Nebraska, so the nonprofit can modernize its existing facility and have ample room for more volunteers and lifesaving supplies to feed people around the world. The organization ships donated food, clothing, and humanitarian aid to people in need throughout the U.S. and in 69 different countries.

Founded in 1992 in Norfolk, the Orphan Grain Train relies on volunteers in 29 U.S. locations to pack the supplies before being shipped globally. The nonprofit served 5.1 million meals and provided more than $37.7 million dollars of humanitarian aid and food last year. That’s no small feat.

“We have experienced a steady growth and needed to expand our organization’s workspace to ultimately help lives in this chaotic world,” said Grant Schmidt, vice president of Orphan Grain Train. “With this new facility, we hope to increase our humanitarian aid to over $60 million and to provide over 10 million meals annually.”

With growing demand, the Orphan Grain Train needed to enhance its facility and add more space for more volunteers and more storage for essential supplies. That’s where we come in. 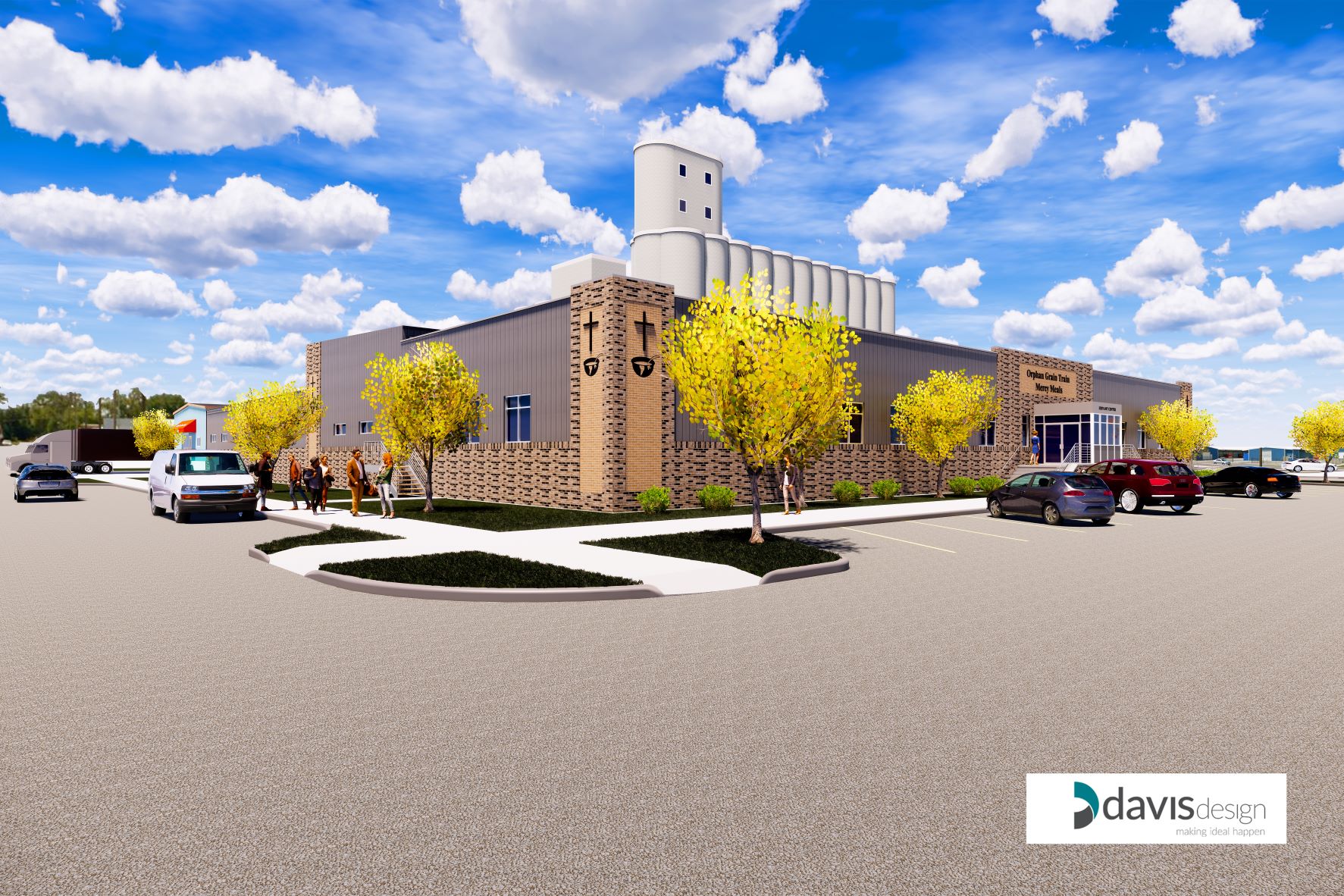 We were brought on the team by Davis Design to help the Orphan Grain Train add a 20,000-square-foot warehouse to its headquarters. As the civil engineering lead, we assisted with site planning, replatting, and rezoning. The downtown facility could not expand until essential permits for rezoning were granted by the city.

We worked closely with city officials to switch the existing light industrial permit to a central business district (C-2) permit, which would allow Orphan Grain Train to build a warehouse facility large enough to serve its needs. Without the updated permit, the expansion of the headquarters -- and increasing its humanitarian aid -- would be out of reach.

We attended multiple planning commission and city council meetings with the nonprofit to discuss rezoning with community stakeholders. Olsson civil engineer Seth Lange explained the advantages of a new permit, benefits to the community, and addressed questions.

“Having the headquarters in Norfolk is a great opportunity for the city to grow,” he said. “Expanding the facility provides not only opportunities for Orphan Grain Train but could increase the number of people going downtown to support community businesses.”

In March, the city council approved the C-2 business district permit, giving Orphan Grain Train the green light for expansion. The new warehouse also required a special conditional-use permit, which was approved by the planning commission.

“The new 20,000-square-foot warehouse will allow larger groups of volunteers to come in to help pack supplies and support additional disaster-relief needs,” Seth said. “Our designs will also help renovate the current facility and make it ADA (Americans with Disabilities Act) accessible.”

After resolving the permitting challenges, we had one more challenge to solve.

“At the end of the day, if these power lines couldn’t be relocated the expansion couldn’t happen,” Eric said. “It was satisfying to overcome obstacles and push this project forward to help a company like Orphan Grain Train expand its warehouse.”

As a Norfolk native, Seth also enjoyed being a part of this project to expand the nonprofit’s headquarters.

“This is the first nonprofit I’ve worked on in Nebraska and it’s my hometown, so it’s extremely rewarding to walk through this process and help make the warehouse possible,” Seth said. “I think this project is just one example of the Olsson way: to help improve the communities around us through our work.”

And in this case, an enhanced headquarters for Orphan Grain Train increases space for community volunteers and lifesaving supplies before they are shipped off around the world. That means more food, more clothes, and more humanitarian aid for Orphan Grain Train to make global a difference. Sounds pretty cool to us.