The Arizona Canal Path is a recreational hot spot for walkers, runners, and cyclists in Maricopa County, Arizona. 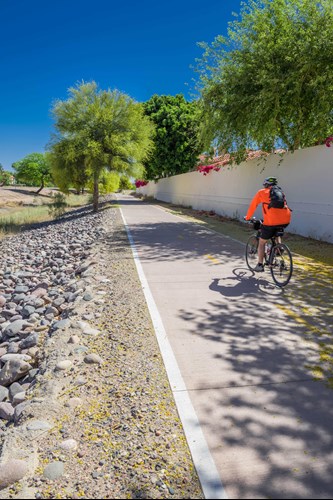 A cyclist rides along the Arizona Canal Path

The path follows alongside the Arizona Canal through the cities of Glendale, Phoenix and Scottsdale.

The City of Scottsdale hired Olsson to provide master planning and design services for development of a two-mile portion of the canal path.

But before the path could be constructed, extensive public involvement was needed to help determine which side of the canal the path should be built and where neighborhood connections should be so residents could easily access the path.

“In addition to the usual local, state and federal players, several Scottsdale neighborhoods were stakeholders in this project as well,” said Rod Penniman, project manager. “Olsson in partnership with the city held public meetings to discuss the alignment of the path and placement of neighborhood connections.”

One of the concerns heard from residents was related to privacy. If the path was placed on the eastern side of the canal, people using the path would be looking directly into other people’s backyards. Residents had the opportunity to ask questions and voice their opinions. Ultimately, the path was built on the western side. 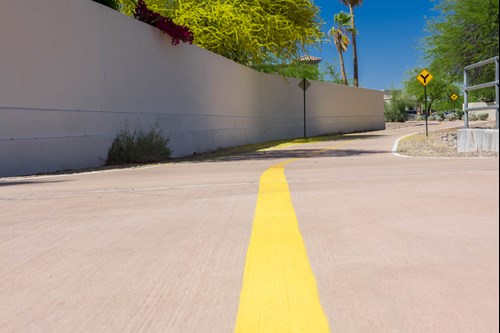 This segment was critical. It completes the city’s 14-mile portion of the Sun Circle Trail, which provides a network of trails along the 68 miles of canal throughout Maricopa County, and it also ties into the City of Scottsdale’s 25-mile paved pathway system.

One regional destination accessible from this network of pathways is Papago Park, which is home to the Phoenix Zoo and the Desert Botanical Gardens. Connections to the Crosscut Canal Trail provide access to Tempe Town Lake and Tempe Beach Park, which are located within the downtown Tempe Mill Avenue District. Local area destinations within the Arizona Canal Pathway include the Indian Bend Wash Greenbelt Recreation corridor which is home to world- class golf courses, an extensive network of multi-use pathways, and several City of Scottsdale parks.

“This is a great recreation trail for all users and it provides a lot of connectivity within neighborhoods in Scottsdale,” said Rod.

In addition to the path itself, other key features were associated with the project – two pedestrian bridges and two HAWK (High-intensity Activated crossWalK) signals.

One of the pedestrian bridges crosses the canal and the other crosses a drainage channel on the western side.

To accomplish successful crossings, a detailed hydraulic analysis was conducted and coordinated with multiple public agencies. A balance was struck between flood elevations (the necessary clearances below the structure) and the adjacent trail facilities and retaining walls.

Orienting the bridges at a right angle to the canal trails required reconstructing approaching trails while minimizing impacts to the channel side-slopes. This created challenges with meeting Americans With Disabilities Act (ADA) requirements approaching and leaving the bridges.

“On any trail bridge project, the user experience should be considered early and throughout the design process,” said Ross Barron, bridge technical leader on the project. “By maintaining this mindset, the design team was able to minimize construction costs, meet hydraulic needs, and provide a smooth transition to the bridges by shifting the trail alignment and being highly selective on the structure type to minimize the trail profile.

“In our experience designing pedestrian bridges throughout the country, public agencies have a strong desire for aesthetic appeal on their trail systems. Often, it is difficult to balance project budgets with these aesthetic goals. The Phoenix area is known for appreciating a high degree of aesthetic appeal in its projects and the canal path was no exception,” he said. 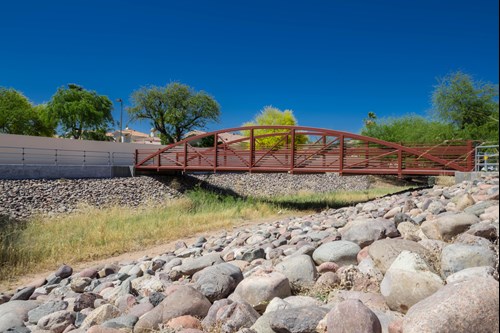 Brandon Roesler, an assistant engineer and lead bridge designer, said, “The client had a strong desire for very grand crossings across the canal. We worked to find structures that would provide economy, blend with the natural topography, and provide a long, viable lifespan. The steel arch bridge selected satisfies these objectives successfully.”

Across the canal, a more standard bridge type was selected. 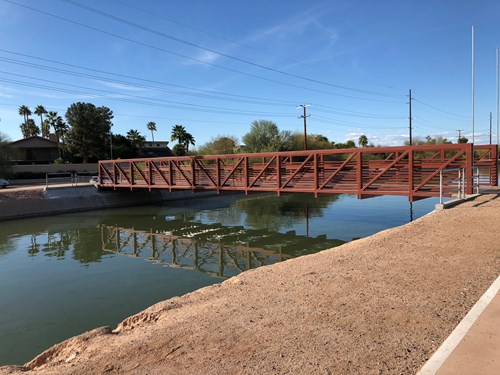 Each steel bridge was custom detailed in partnership with the fabricator to achieve certain aesthetic details such as minimizing the visuals of the bearings and joints, decking, and painting.

“The bridges blend in nicely with the surrounding area and add intermediate access points where people can cross the canal without having to travel all the way to the next roadway crossing,” said Brandon.

“The HAWK signal was developed in the early 1990s as an effective safety measure to help protect people when crossing a busy street,” said Rod.

Different from a conventional traffic signal’s red-yellow-green format, the HAWK consists of a red-yellow-red signal format for motorists. The HAWK is only activated when a pedestrian pushes a button, allowing vehicles to move freely when no one is crossing the street. 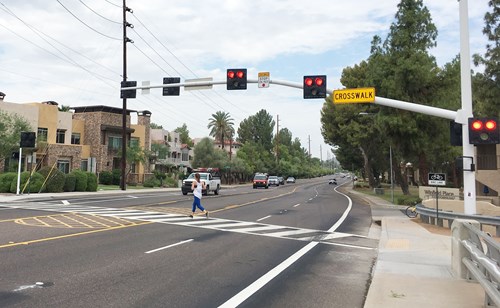 Drivers should respond to yellow and solid red lights in the same manner as any other traffic signal. After stopping for the red light, drivers may proceed through the crossing area during the flashing red light interval only when it’s safe to do so without risk to pedestrians.

The HAWK signals installed at Chaparral Road and McDonald Drive provide a safe way for canal path pedestrians to cross the busy streets.

“This entire project was a great success. When I’ve visited the site, I’ve seen many people walking, jogging and cycling along the new portion of the canal path. It’s an asset to the City of Scottsdale,” Rod said.