Brazos River Stabilization Halting a Migration Near a UPRR Track

This is especially true for Union Pacific Railroad’s (UPRR) Fort Worth Subdivision track that extends from Fort Worth to College Station and is part of the main UPRR route between Dallas-Fort Worth and Houston. This track carries tons of freight each day and any disruption in service could hurt consumers in two of the largest metro areas in the U.S.

So, in early 2017 when UPRR officials noticed a segment of the Brazos River was migrating close to its track near Eloise, Texas, they reached out to Olsson for help in stabilizing the riverbank along a half-mile stretch of track. From 1955 to 2015, the river migrated up to 20 feet per year toward the track. Starting in 2015, the migration accelerated to 50 feet per year, putting the track in imminent danger. As if the job wasn’t difficult enough, the bank featured a 30-foot, near-vertical drop to the river.

When UPRR reached out to us, the river was about 55 feet from the track, so we knew the clock was ticking. We immediately went to work figuring out a permanent solution that would keep the line open and stop the river from migrating toward the track.

“Based on initial analysis, we thought that in two years the track would be gone or that a large flood event could destroy it,” said Mark Egger, project engineer at Olsson who oversaw the project. “UPRR reached out to us for an idea to stabilize the riverbank, and from there it developed into a full design project.”

To understand the scope of the challenge, Olsson first assisted UPRR by completing a geomorphic analysis of the river. We learned that in 1955 the river was flowing more than 1,000 feet away from the track but had been slowly moving toward the track because of bank erosion during high flows. Olsson also completed a geotechnical analysis and discovered that sandy soils along the bottom of the riverbank were prone to erosion during high flows and caused sections of the bank to slough off. 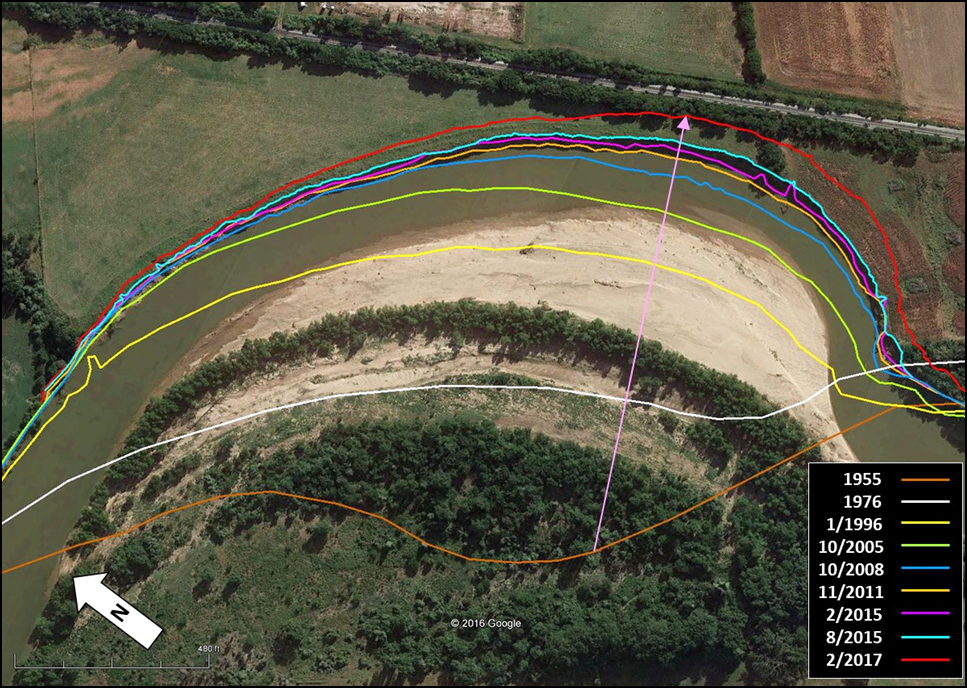 Over time, water washed out the sand, causing the soil above to fall into the river and wash away.

We then used a combination of traditional topographic, drone photogrammetry, and bathymetric survey to determine the existing ground surface of the river bottom, vertical bank, and overbank area.

“This project called for a unique approach to gathering survey data,” Mark said. “With a 30-feet high vertical face on the riverbank and soil constantly crumbling off, it wasn’t safe for people to be near the edge of the bank, and traditional topographic survey wouldn’t provide an accurate survey of the face of the bank. That’s why we decided to do three different types of surveys so we could have an accurate ground surface to design improvements from.”

Before any work could be done, our environmental team secured a U.S. Army Corps of Engineers Nationwide Permit to repair uplands damaged by discrete events, allowing us to restore the damage and stabilize the bank.

The environmental team also discovered several threatened and endangered species in the project area, including sharpnose shiners, smalleye shiners, smooth pimpleback mussels, Texas fawnsfoot mussels, and alligator snapping turtles. Prior to excavating the channel, representatives of the Texas Wildlife Department and our team conducted a mussel survey along the riverbank. Mussels observed within the proposed area of stabilization were identified and relocated upstream away from the project area.

After analyzing the survey results, our engineers decided the best solution to stabilize the riverbank would be to design a riprap revetment along the bank. Our design called for the creation of a berm made of riprap on the toe of the slope of the riverbank. Work began on both ends of the affected bank. 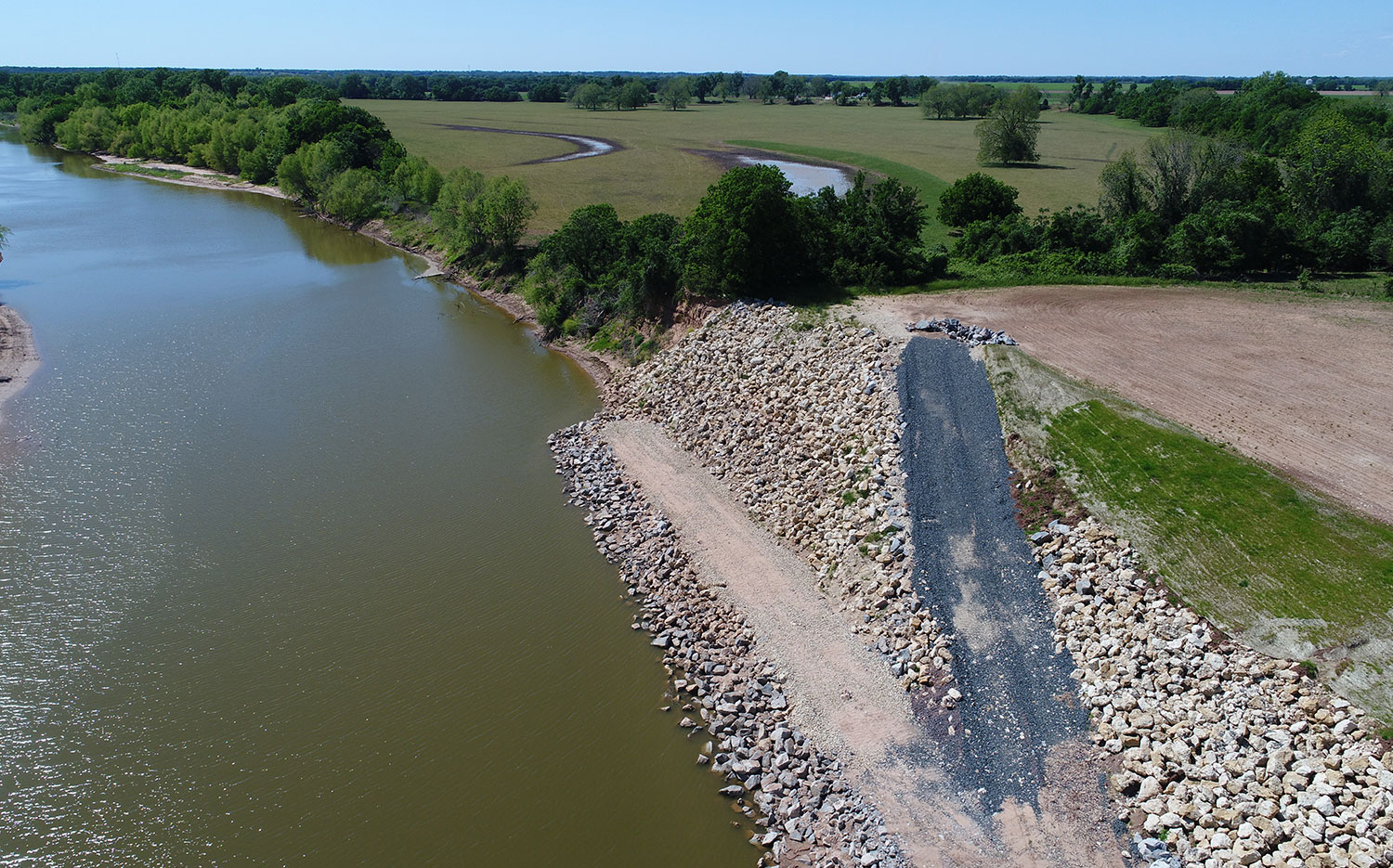 Reid Construction, the lead contractor, excavated the bank back to make it more stable and allow vegetation to grow. To secure the bank, we used 75,000 cubic yards of riprap, some of which was delivered to the site by train.

Construction of the project was completed in January 2018. Most important, we were able to complete the project while keeping the track open for business.

“We knew this was a high-volume corridor that couldn’t afford to go down,” Mark said. “It could have caused a major disruption to Union Pacific’s entire network. By determining we could fix the river itself, we saved UP a lot of money, kept the track open, and permanently stabilized the bank.”