An innovative way to treat wastewater in Batesville, Arkansas

When the water treatment system in Batesville, Arkansas, reached the end of its lifespan, city officials made a bold decision. Rather than simply patching and expanding the 30-year-old system or replacing it with something similar, Mayor Rick Elumbaugh and City Engineer Damon Johnson and the city council decided to infuse innovation into the city’s vital infrastructure.

The city worked closely with McGoodwin Williams and Yates (MWY), a division of Olsson, to design and engineer a moving bed biofilm reactor (MBBR) wastewater treatment system, the first of its kind in Arkansas. The new water treatment system is the largest MBBR system in the United States, and it delivers a flexible, cost-effective, easy-to-operate system that can be quickly expanded as needed. 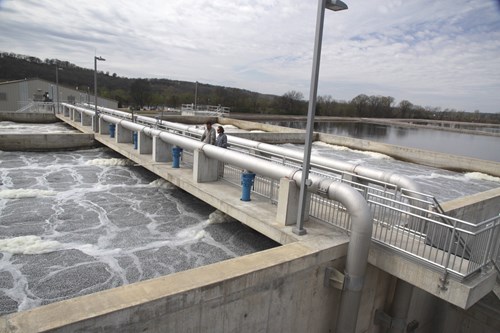 “The MBBR wastewater treatment system uses a more sophisticated process that treats a higher capacity of water in a smaller footprint of space,” said Jim Ulmer, engineering technical leader at MWY, who served as project manager of the Batesville project. 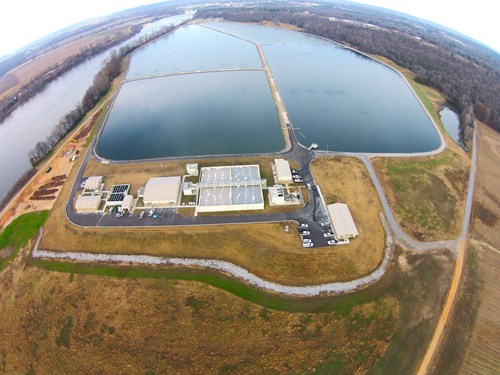 An aerial view of the Batesville wastewater treatment system

“MBBR is used by cities in northern Europe, and that got our attention,” Damon said. “As we started to learn more about it, we visited some plants in Colorado that use an MBBR and we were amazed how easy it was to operate. It was almost foolproof on a lot of levels.”

Another drawback to Batesville’s previous wastewater treatment system was that it only minimally treated the water before discharging it. The organisms would then take the oxygen out of the water, which means the organisms that kept the river healthy would die.

What makes Batesville’s innovative wastewater treatment system unique is it combines a series of lagoons, a basin, and the MBBR. The MBBR treats wastewater through an organic process by applying vigorous aeration to the wastewater system tanks, which contain millions of small plastic media. The plastic media create an enhanced environment, which in turn improves the efficiency of the treatment process.

The results have been amazing. The plant’s discharge goes directly into the White River, and the system works so well that it discharges a much higher quality than that required by the permit. The amounts of ammonia and nitrogen have been reduced to nearly immeasurable amounts. 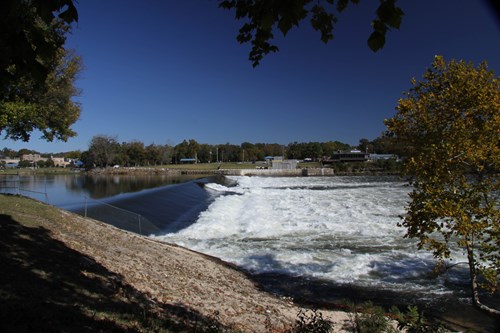 System discharges water at a higher quality than required by permit

“We are leaps and bounds below our permitted levels, and we reached those levels with minimal effort,” said Damon, Batesville’s city engineer. “I worked in construction before I started working for the city, and I was involved with building many plants. Very few plants come online and work instantly like our wastewater treatment did. It’s a good plant, and we’re very happy with it.”

A major part of the project involved replacing the system’s main pump station, which discharged the sewage to the treatment facility through a 24-inch pipeline along the bank of the White River. By taking advantage of the natural landscape, the team drilled a tunnel through a mountain between the city and the wastewater treatment system. The tunnel was large enough to hold a 60-inch-diameter pipe.

The tunnel allows the new facility to use about a third of the energy the former system needed. 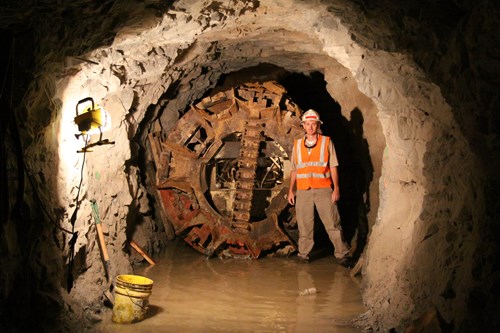 The Batesville MBBR wastewater treatment system has earned national and regional acclaim. The Environmental Protection Agency cited the system as a Green Project, and as a result the city received a major grant from the American Recovery and Reinvestment Act. Vice President Joe Biden named Batesville’s efforts a Recovery Act project that changed America. Recently, Batesville received the Engineering Excellence Award by the Arkansas chapter of the American Council of Engineering Companies and an Arkansas Trendsetter City award for its innovative MBBR wastewater treatment system.

“Our MWY team designed a wastewater treatment system that will have a lasting impact on the city and its residents while maintaining the pristine environment of the White River,” Jim said. “Major accomplishments like this only occur when the city leaders, the design team, and the citizens who chose to finance the construction with a sales tax work together to better the community.”