A Street For Everyone: Study Reimagines Critical Corridor

South 13th Street in Omaha, Nebraska, channels tens of thousands of cars and trucks every day through a core area of the city. Yet those who work and live along the busy arterial believe it could handle so much more.

They support the idea of 13th Street as a gateway to downtown Omaha and the people-magnet known as the Old Market District. They want a corridor that provides pedestrians, bicyclists, and motorists safer access to landmarks such as the historic Vinton Street Business District and the Little Bohemia neighborhood. And they think the street could be more conducive to transit as well. 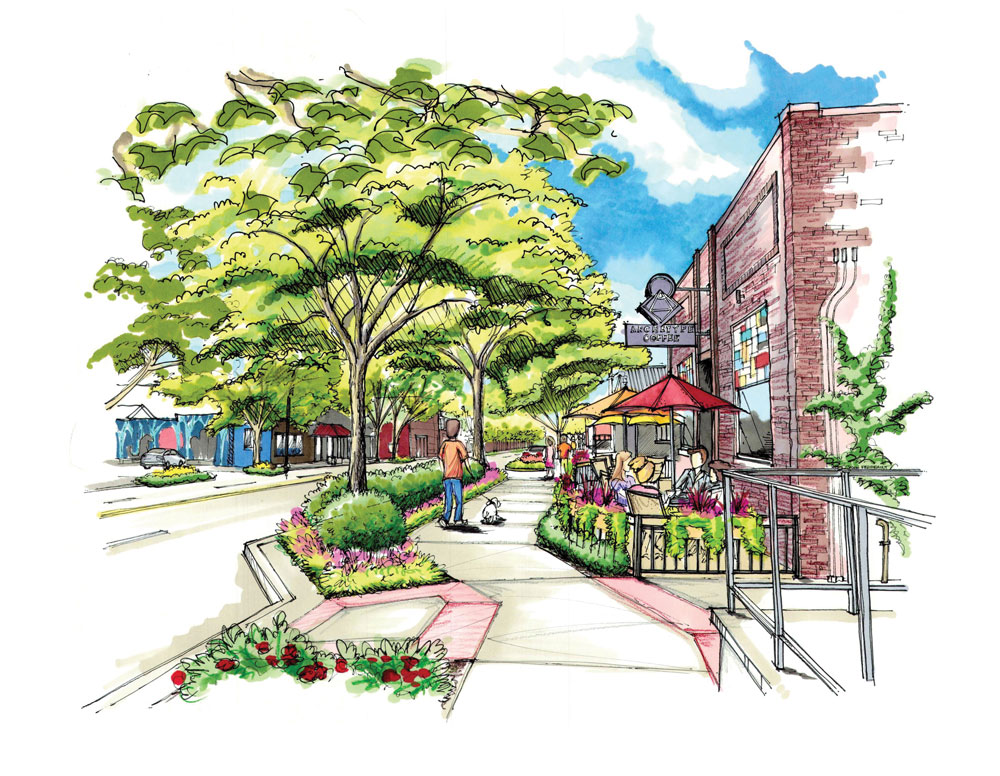 What they would like to see is a multimodal corridor that realizes the goals established in the City of Omaha’s Complete Streets Policy. The policy seeks to incorporate the appropriate and necessary space for all modes of travel when designing and maintaining streets.

To create a holistic vision for 13th Street that meets those benchmarks, city officials sought assistance from Olsson. Over the course of nine months, our partnership produced the 13th Street Walkability Study.

“Looking at it historically, this is probably the most comprehensive corridor review that’s been done in the city,” said Gayle Sturdivant, design division manager for Omaha’s Public Works Department. “Not only did it look at vehicular needs, it considered all needs in the right-of-way in a land use context. It really came up with a comprehensive plan for how the corridor could look and work.”

“We’re extremely happy with the work Olsson did on this project.”

The 46-page study contributes to our growing resume of work related to “complete streets,” which make municipal transportation corridors safer, more accessible, and easier to navigate for everyone. Nearly 1,500 communities across the country have adopted complete streets policies, according to Smart Growth America, a nonprofit urban planning and advocacy organization.

“Our team has worked across the country to assist communities to reclaim streets for all users,” said Nick Weander, a senior client consultant for Olsson.

The 13th Street study focused on the 2-mile stretch of the corridor that connects Interstate 80 on the south to Interstate 480 on the north. Although past city planning initiatives had overlapped the area, there had not been previous study of the entire corridor.

Our approach incorporated engineering analysis, transportation planning, and community visioning. In addition, we analyzed multiple technically feasible alternatives with the help of our diverse team of in-house experts. 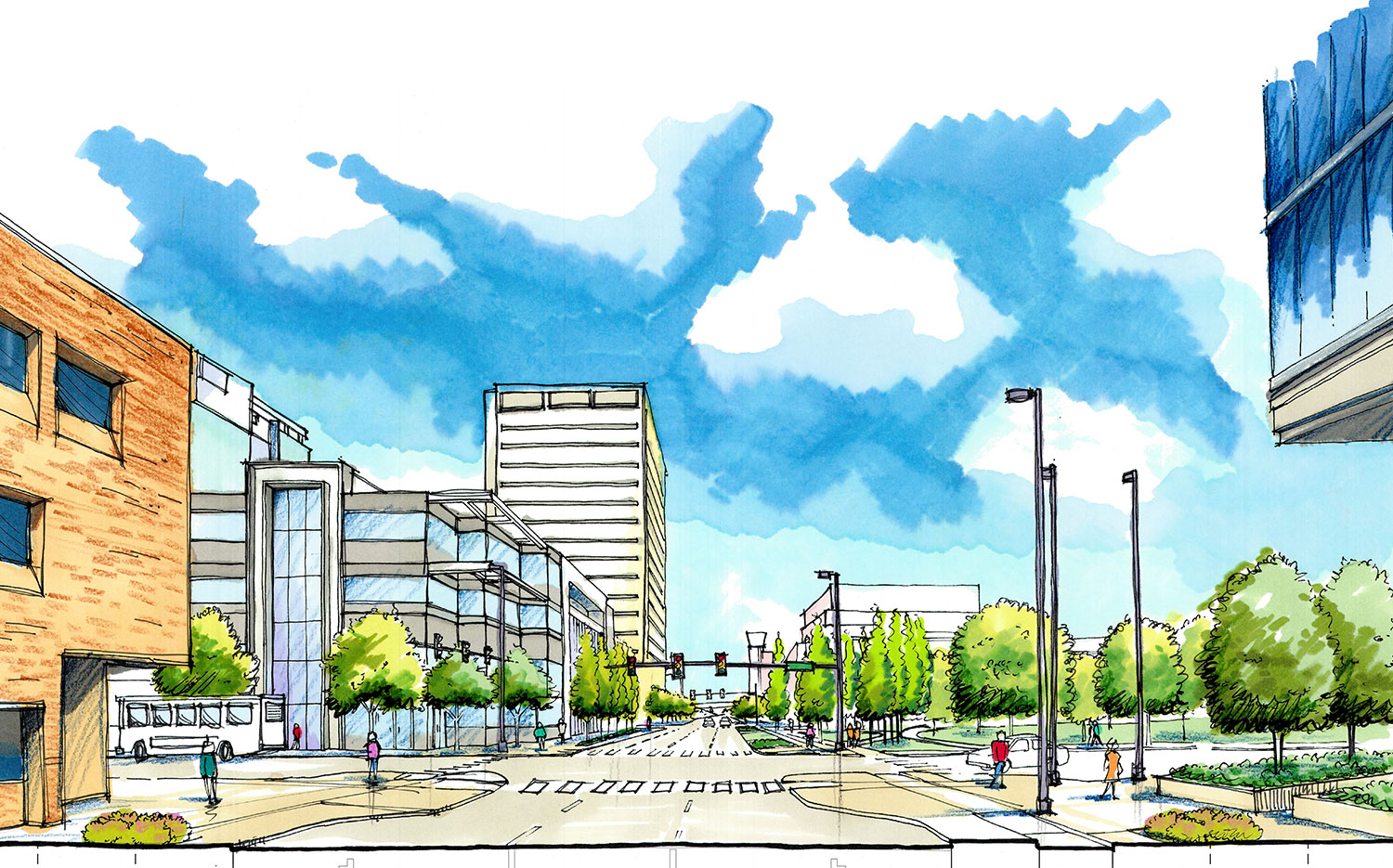 We first sought to better understand existing conditions in the corridor, which involved the collection and analysis of data related to traffic demands, pedestrian use, crash patterns, and more. Data revealed daily traffic counts as high as 31,000 vehicles and daily pedestrian counts of up to 2,000 along the busiest segments.

The city eagerly sought input from all users: commuters, business owners, and residents most familiar with the corridor. We organized general public outreach meetings, open houses, and focused conversations with two stakeholder groups – based upon the characteristics of the north and south portions of the corridor. The input helped identify three guiding tenets: serve the needs of existing users (including freight), improve safety for all users, and enhance aesthetics and placemaking.

“People were pleasantly surprised and happy to see that their involvement in the process actually had tangible results in the study,” said Chris Rolling, a transportation team leader with Olsson who managed the project. “It gave the community ownership of and buy-in to the whole idea of the study.” 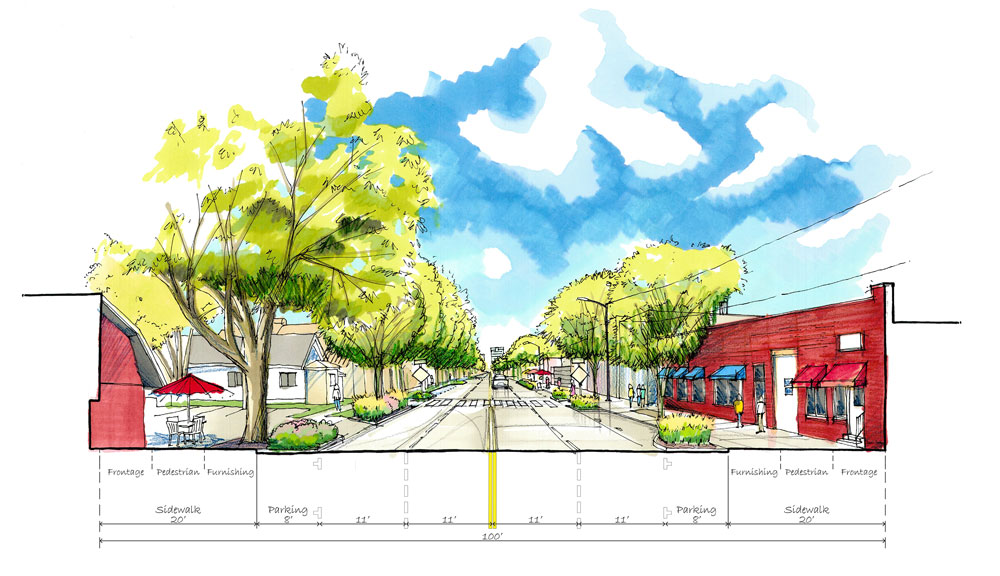 The study generally identified the need for two through lanes in much of the corridor, the addition of on-street bike lanes in designated segments, comprehensive sidewalk improvements, additional crossings, and aesthetic upgrades to the pedestrian right-of-way.

The study provides a pathway for project development and execution along the corridor, regardless of whether the catalyst is public infrastructure work, privately funded development, or a combination of both. Rather than a strict blueprint, the study represents a touchpoint for the city now and in the future.

Shortly after the 13th Street project was wrapped up, the city retained Olsson to complete development of Omaha’s Complete Streets Design Guide. City officials released the 89-page final draft of the guide in August and will revise and adopt the document after a six-month comment period and testing phase.