Joplin’s public library was small and not completely accessible to everyone, according to regulations set forth in the Americans with Disabilities Act (ADA). City officials set out to replace the library with a new facility that everyone could enjoy.

Although the public library was spared from the massive tornado that destroyed about a third of the city in 2011, Joplin was awarded a $20 million economic development grant to construct a new library based on redevelopment needs in the aftermath of the storm.

Joplin’s Planning and Neighborhood Development Department hired us to design site infrastructure for the new public library. The design had to be sensitive to increased vehicle, pedestrian, and bicycle traffic, stormwater runoff, and aesthetic needs in landscape architecture.

First, we put together a project team, which included Design Workshop, a landscape architecture firm that was a key player in the project, and a traffic engineer. We also held a design workshop. The team was responsible for the design of the nearly 7-acre site.

The team assisted with public involvement on the front end of the project, the initial grading plan, site remediation, utilities and lighting planning, and trail and sidewalk connectivity for easy pedestrian and bicycle access. As plans changed and the building kept growing, we had to find room for stormwater retention. The solution was to store it under the parking lot.

When the new library was completed, it had about 65 percent more space than its predecessor. Aisles are wider than in the previous library, and the shorter shelves are now in compliance with the ADA. Now, the library is accessible to all patrons. 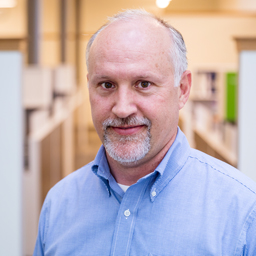