Olsson’s Field Services teams typically use their skills to ensure basic infrastructure such as roads, sidewalks, and pipelines is constructed on a solid foundation and installed in accordance with the project’s design and specifications. So, when an opportunity arose for members of the Lincoln Field Operations team to work on an aquatic center in Tecumseh, Nebraska, they jumped at the chance to do something different.

Little did they know the task at hand would be so challenging.

At first, the project was business as usual. From the project’s onset in June 2019 through the installation of the new lift station in October of the same year, the team provided its usual services, such as construction administration (CA) and materials testing, to ensure quality of installed materials, proper installations, trouble-shooting construction questions, and helping to keep the project on schedule.

But when an issue with the new lift station cropped up, the team’s role drastically changed overnight.

A subcontractor excavated a large area of the site near the pool to set a precast concrete lift station, 6 feet in diameter and more than 25 feet deep, which was designed to pump groundwater away from the aquatic center. However, once placed, the lift station immediately started to lean and then settle. Compounding the problem, ground and surface water from rainstorms immediately started filling the large excavation. This led to removing the first precast concrete section so additional stabilization measures could be implemented.

Initially, the subcontractor attempted to stabilize the area by placing sheet piling around the perimeter of the excavation and installing more rock riprap under the lift station structure. This effort failed, resulting in the same settlement as before. So, the prime contractor for the project reached out to our team for help. 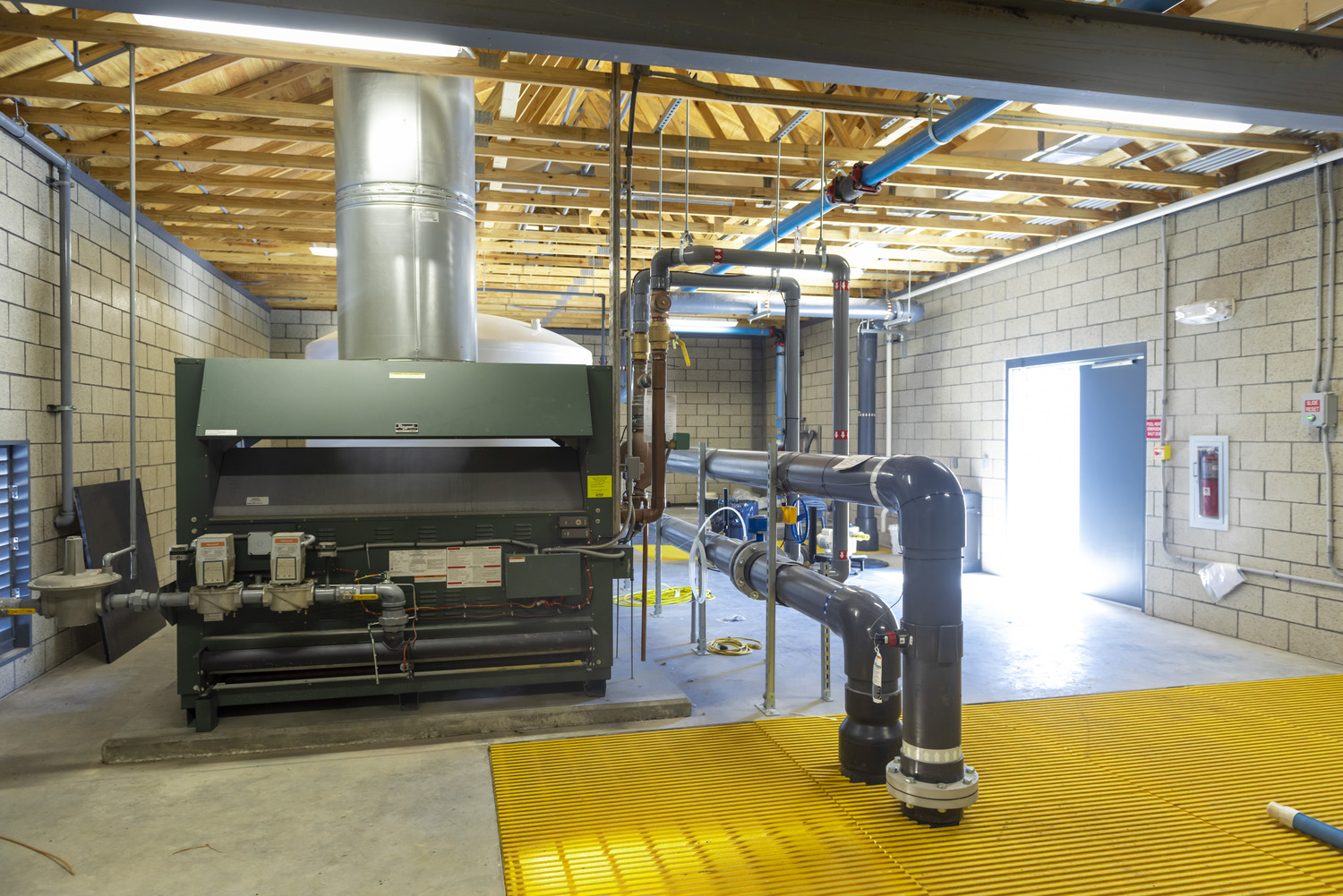 Inside the lift station at the Tecumseh Aquatic Center.

“This was a critical-path item, meaning the project couldn’t move forward until this was solved,” said Lance Murry, CA manager for Olsson’s Lincoln Field Operations team. “Everything was at a standstill until we came up with a solution, so there was a sense of urgency. We couldn’t afford to try something, fail, and go back to square one.”

Thankfully, Olsson has a team of experts whose specialty is thinking outside the box. Steve Nickel, Tom Kettler, and Steve Jensen, who are all experts in solving soil engineering problems, came up with a creative solution. Their plan called for excavating an area larger than originally planned by the contractor, adding sufficient rock riprap to stabilize the lift station’s footprint, and placing large concrete blocks (think super-sized Lego bricks) on the rock pad to preload the underlying soil. The recommended concrete blocks, typically used for large-scale retaining walls, were purchased from the local ready-mix concrete plant. Using these concrete blocks was the most cost-efficient, readily available, easy-to-install, and predictable solution for this situation.

Once the preload area was completed, Mike Shea, the CA assistant technician, spent the next few weeks measuring any movement of the preload site. Our Geotechnical team developed a graph for recording any movements we observed while monitoring the site until no further significant movement was observed. The settlement process took about a month, which allowed the subcontractor to complete installing the lift station so the station could begin to dewater the site as designed.

“Mike made sure we took the time to do corrective measures to move the project along,” Lance said. “What we came up with was innovative, and our team was able to turn work around within the shortest amount of time possible.”

Our efforts didn’t go unnoticed by Tecumseh city officials. Doug Goracke, streets, utilities, and parks superintendent for the city, knows what to expect when he works with Olsson. During the last 10 years, Doug has worked with Shayne Huxoll, a design manager for Olsson’s Lincoln General Civil team, on several projects.

“We’ve never had any problems working with Olsson,” Doug said. “Shayne is very conscientious in everything he does for us, and Lance and Mike did a great job. The bottom line is, I know and trust the people of Olsson. That’s why we keep bringing them back. We know what we’re going to get from Olsson every time.”

Tecumseh’s aquatic center was much needed and long overdue.

The city’s first municipal pool was designed (by Olsson) and built in 1969. It was more than adequate by the standards of the time, with a lap pool and diving boards, but had become outdated and reached the end of its useful life cycle. In recent years, the city spent about $10,000 a year on maintenance to fix things like a broken pipe or a failed pump. In addition, the concrete in the pool’s bottom was cracked and leaking, so city leaders decided a new aquatic center was in order.

“The old pool served its purpose and the city definitely got its money’s worth for a project that would last more than 50 years,” said Shayne, the aquatic center’s project manager. “The old pool didn’t have a lot of bells and whistles and had kind of lost its luster.”

In addition to managing construction services, Olsson led all aspects of the design process for the new aquatic center, including project management, conceptual planning, public involvement, and design. This project required the involvement of several teams including Surveying; Geotechnical; Structural Engineering; Mechanical, Electrical, and Plumbing (MEP); and Landscape Architecture. 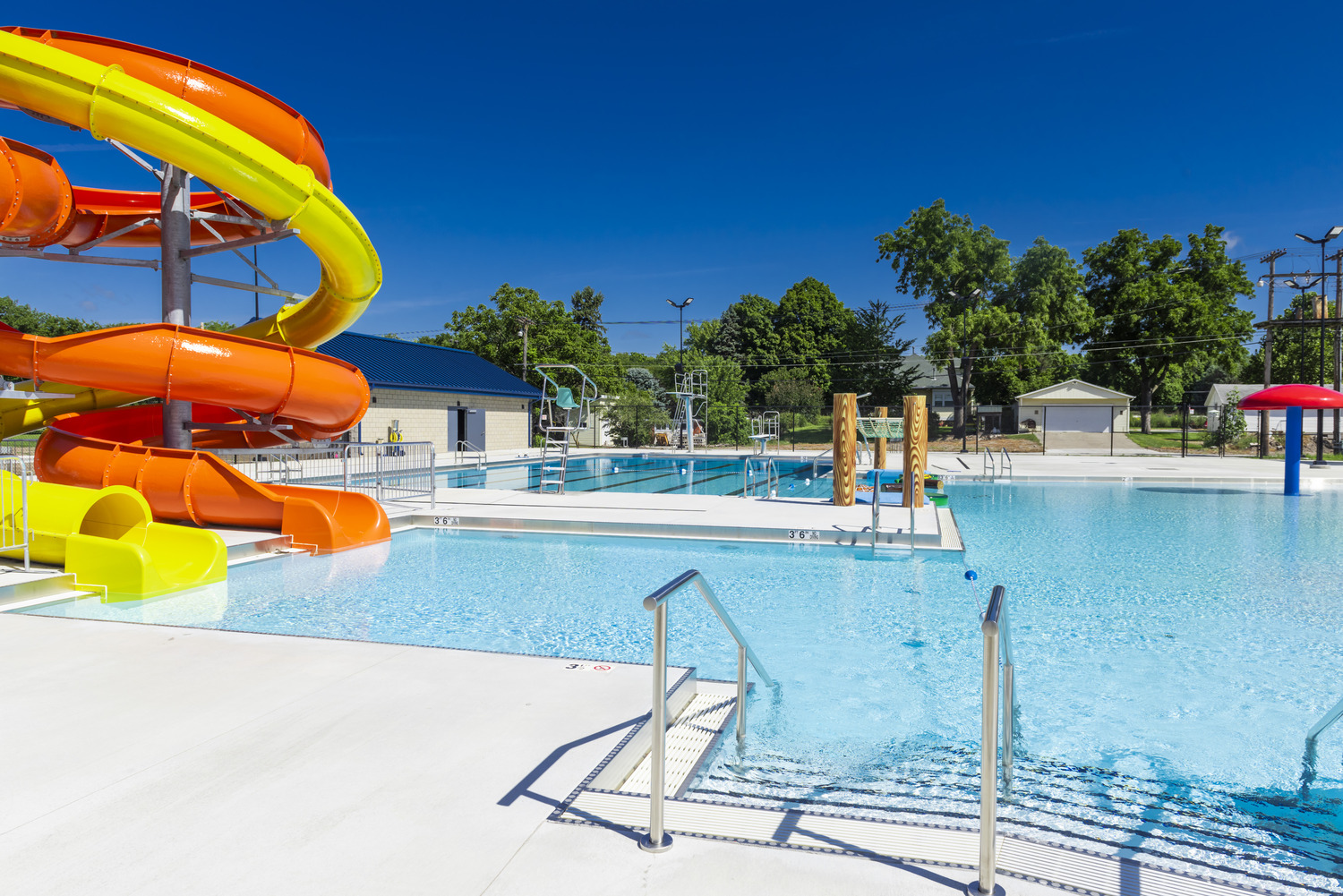 A view from the deck of the Tecumseh Aquatic Center, which features a new bathhouse, slides, diving boards, and a variety of water toys for swimmers to enjoy.

Features for Tecumseh’s new aquatic center include zero-depth entry so young children can sit in shallow water while also allowing ease of entry for patrons with mobility challenges; water geysers in shallow areas; a frog slide for toddlers; a large umbrella with water cascading over the top and into the pool; two large waterslides with enclosed and open flumes; high and low diving boards; concrete decking for sunbathing; a concession stand; a new bathhouse; space for lifeguards; and a separate building that houses all the pool filters and chemical equipment.

“A large portion of the work we do is underappreciated, unnoticed, buried, or taken for granted,” Shayne said. “It’s nice to have a project like this that brings pure joy and healthy entertainment to others. Kids will love it. Adults will love it. It provides exercise and a place for families and friends to spend time together. It’s a great project to be a part of.” 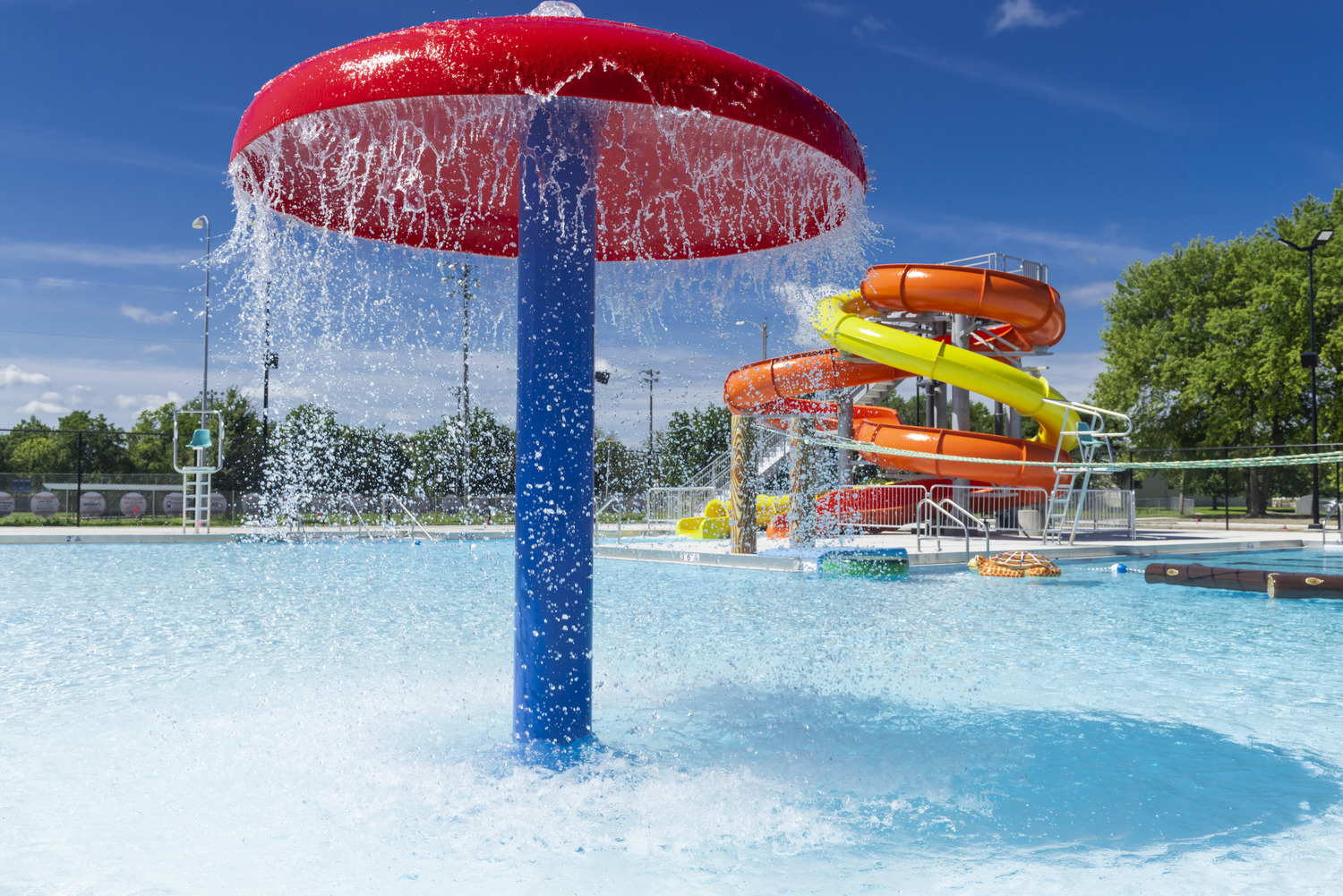 The new aquatic center in Tecumseh features many modern features.

Despite the lift station challenges, the $3.2 million aquatic center was built very closely within the original budget, with a less than 1 percent total budget increase because of owner-requested items or unforeseen site conditions. “In this industry, that reflects very well on the experience, detail, and knowledge of the entire team,” Shayne said. “Every team member should be proud of this accomplishment.”

Everyone has been affected by the COVID-19 pandemic, and this project was not spared. Because of production delays caused by the pandemic, a water play feature and the lifeguard station platforms have yet to arrive at the project site for installation. Although these key items would have delayed the 2020 pool opening, the city decided not to open because of pandemic concerns anyway. However, once the delayed items are installed, the pool will be 100 percent operational, so it will offer residents of Tecumseh a place to relax and cool down in the summer of 2021.

“We contemplated opening it, but we’d only be able to keep it open for 30 days because of our staff going back to high school and college,” Doug said. “We’ll try to have an open house in August so everyone can see it, and then we will winterize it so everyone can enjoy it next summer.”