From Meteorologist to Stormwater Engineer in Northwest Arkansas

Be careful when you ask Olsson’s Aaron Boll about the weather. You see, Aaron knows his wall cloud from his squall lines, so make sure you have a spare moment or two if the topic ever comes up.

When KNWA, the NBC affiliate in Fayetteville, Arkansas, needed someone to deliver the weather during the morning newscasts and break-ins this summer, the station’s chief meteorologist, who knew Aaron’s background, reached out to see if he would fill in for a couple weeks.

Aaron’s expertise in all things weather is well documented. Before he changed careers and became an engineer, Aaron was a meteorologist for several years after he graduated from the University of Nebraska-Lincoln with a bachelor’s degree in meteorology.

And that’s how an associate engineer based in Olsson’s Fayetteville office came to tell the people in Northwest Arkansas whether to reach for the sunscreen or an umbrella for two weeks earlier this summer. 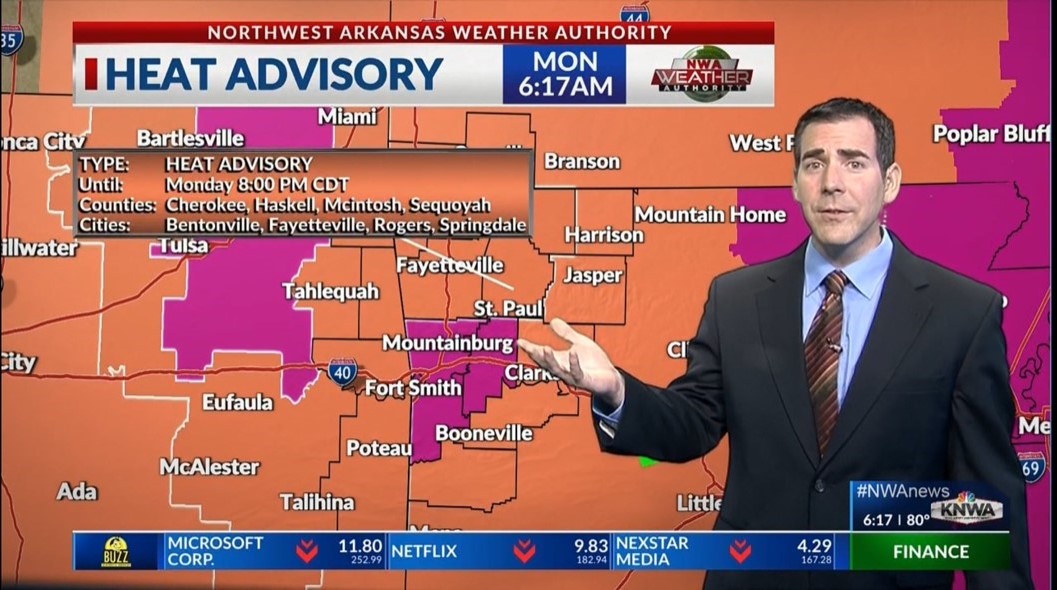 “It was kind of fun to step back into the industry,” Aaron said. “But it definitely reaffirmed my decision to go back to school and become an engineer. It was nice to dip my feet back in the water and not stay long-term.”

After earning his bachelor’s degree in meteorology, Aaron interned at several TV stations and then ended up in Springfield, Missouri, in 2011. Just weeks into working in Springfield, the Joplin tornado hit. He was the only weather person on staff at KSPR that day and did wall-to-wall weather coverage for five hours, warning viewers to take shelter as the storm continued to produce tornado damage. The following days and months, he also got to report on tornado recovery and tell miraculous stories of survival.

Though Aaron enjoyed his work, he realized he would need to make a change down the road, because with the job came long shifts at odd times (think early in the morning or late at night) and frequent moves. As he approached his 30th birthday, he realized he wanted to do something different.

As a kid, Aaron was fascinated by the weather, especially flooding, and he would build dams and channelize storm drains.

That’s how he decided to become a stormwater engineer.

“Instead of telling people it’s going to flood, I could fix the infrastructure before it happens,” he said.

Aaron enrolled at the University of Missouri Science & Technology, and two years later left with a bachelor’s degree in civil engineering. He spent time in the stormwater department with the City of Springfield before joining Olsson in 2017.

His first task with Olsson was to help with a few of the final recovery projects in Joplin.

“It was really neat to go from warning viewers about the destructive tornado and documenting their stories of survival to actually helping the community rebuild,” he said.

As a member of the firm’s Water Resources practice, he’s been able to help communities avoid and fix problems with floods rather than report on the devastating effects of rising waters.

“It’s really rewarding to help communities that may have struggled with flooding,” he said.

His newest venture is to start a Water Resources team in Northwest Arkansas, so Aaron recently relocated to Fayetteville to help Olsson grow its water resources presence.

When he’s not discussing the weather on TV, Aaron’s team is working on seven stormwater rehabilitation projects in Bentonville, which entails fixing aging storm sewers and adding new storm sewers to address flooding issues. In addition, the team just began a study of Lake Fayetteville to help the city discover options that will improve water quality for the lake, which will benefit recreational uses for area citizens.

“Northwest Arkansas has grown so quickly in the past couple decades that infrastructure is playing catch-up in many locations. I look forward to helping communities deal with their flooding issues,” he said.

He might also help you know how to dress for the weather before you head out the door in Northwest Arkansas.