The American flag unfurled in the breeze as a young woman sang “The Star-Spangled Banner.”

The governor delivered a speech, thanking state transportation officials, consulting engineers, and construction workers for their hard work on what seemed an impossible project.

And a local radio station streamed the ceremony live on social media.

All to celebrate the opening of a temporary, single-lane bridge over the Niobrara River in north-central Nebraska.

Residents of Boyd and Holt counties welcomed the end of two-hour driving detours, which began March 14 when historic flooding washed away 1,000 feet of pavement at the south end of the U.S. Highway 281 bridge. A crowd gathered Monday near the shiny, steel span to also recognize the extraordinary effort it took to design and build a highway bridge in less than five months – a process that would take at least two years under normal circumstances.

“Hats off to Olsson, Tom Leikam, and his team, for the great design work,” said John Prouty, owner of Prouty Construction in O’Neill and one of the contractors invited to speak at the celebration.

The temporary bridge runs parallel to an access bridge used by the contractor for assembly and construction.

From the moment we were put on the job in March, staff from across our firm embraced an unprecedented challenge: Design temporary and permanent bridges and roadways so the Nebraska Department of Transportation (NDOT) could restore an essential highway route to the region by Aug. 1.

We imposed an internal deadline of April 17 to complete our design work. Tom Leikam, the senior project manager who led the effort, didn’t have to tell anyone that designing a project of such complexity would normally take at least a year.

Despite the compressed timeline, we used the same approach we employ on all projects. We took each problem apart and found a solution.

Michael Laird, our lead drone pilot, obtained site photos and video. William Spitz, our geomorphology expert, assessed how the flood had cut a new south channel and how the altered river would change over time. Steve Nickel, our geotechnical industry expert, and Daryoush Razavian, our national hydrology expert, provided invaluable insights about how the soil and stream would affect the bridge and road designs.

One of our geotechnical crews working in the region managed to get to the bridge site and obtain borings. Surveyors arrived at the river early and stayed late.

Ross Barron, engineering technical leader, led our bridge design staff to develop a temporary 600-foot bridge that could be constructed on an accelerated schedule to restore highway traffic as quickly as possible. Our bridge staff also prepared the detailed design for a permanent 1,050-foot bridge to span the new channel.

Our approach allowed both bridges, plus repairs to the existing highway bridge, to be bid as a single contract. Working with the NDOT staff, our estimated project cost came within $57,300 of the number submitted by the winning bid.

And we met our April 17 deadline.

"The Highway 281 project is one of the department's most complex reconstruction efforts," NDOT Director Kyle Schneweis said in late May as the $26 million contract was awarded to Hawkins Construction. 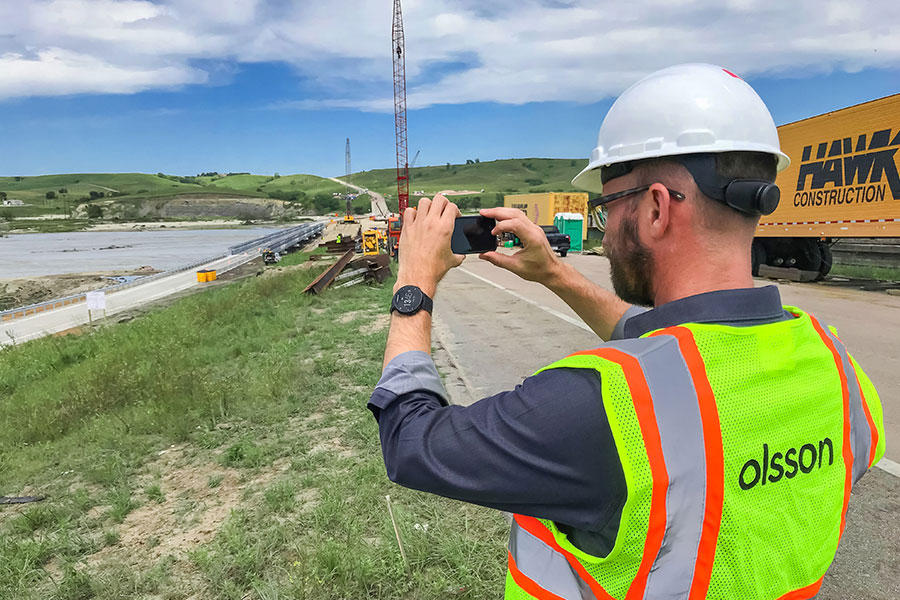 The contractor built an access bridge across the river channel to provide a work platform where crews could assemble the six spans of the temporary bridge. Construction cranes then positioned each section in place.

Meanwhile, road crews built new segments of roadway to connect to both ends of the bridge. The bridge is open to one-lane traffic controlled by a signal and is restricted to legal loads and a 12-foot width. It will be removed after the permanent bridge is complete, currently scheduled for November 2020.

Chris Hawkins, chief operating officer of Hawkins Construction, said the project may represent the most significant challenge undertaken by his company during nearly a century in business. Jon Olsen, an engineering technical leader with Olsson who led design of the roadway portions of the project, said he’s never seen anything like it in more than 25 years in the profession.

“The design was right on,” Jon said after inspecting the project Monday.

The temporary bridge opened a week early on July 26.

Nebraska Gov. Pete Ricketts praised the work of Olsson and the other private sector partners who helped NDOT complete the project on such a tight time frame. He called it “a huge accomplishment” to restore an essential crossing in about 135 days after a catastrophic flood.

“This really has an impact on people’s lives,” the governor said. 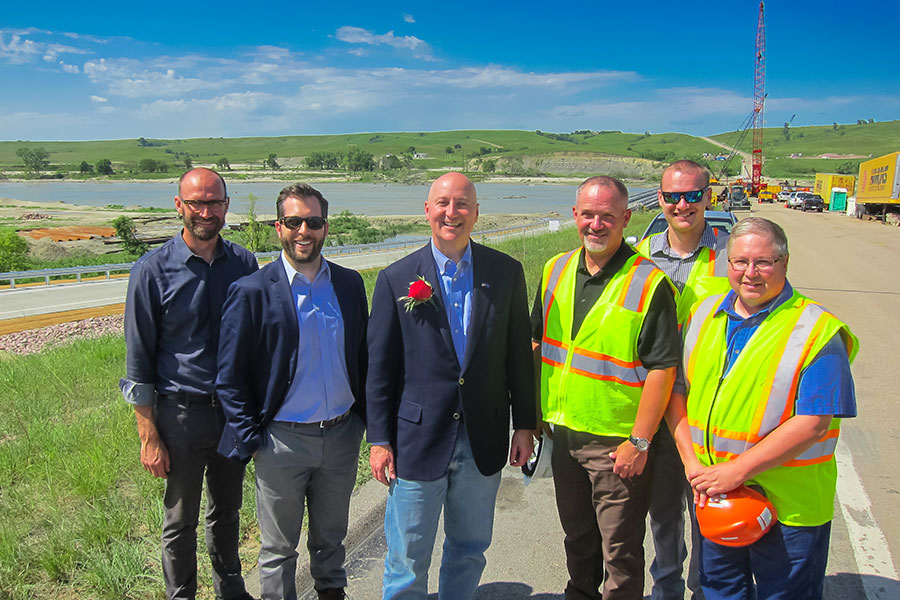 His comments were echoed by Mark Kovar, district engineer for the NDOT’s District 8, which includes Boyd and Holt counties.

“Without their work behind the scenes to get things designed and the contractual part of this put together so Hawkins could get here and get to work, this wouldn’t have happened today,” he said.

Tom Leikam, one of our veteran engineers, is not easily impressed. But even Tom liked what he saw after inspecting the site and attending the ceremony with his colleagues.

“I think it’s pretty impressive how much we all got done in such a short period of time.”